Music is the soundtrack to our lives. It magnifies the milestones of our lives – leaving school (‘Sit Down’ by James), Freshers’ Week (‘Dizzy’ by Vic Reeves and the Wonderstuff), wedding (Elvis’s ‘Love Me Tender’), anniversaries (‘Life With You’ by the Proclaimers)… you get the picture (and a pretty good estimate of my age as well).

And for many of us, music is a spiritual home, the place where we belong.

What kind of Scottish Popster are you?

Ripping up the rule book and starting again

For an online content manager, Rip It Up: The Story of Scottish Pop has been an incredibly interesting exhibition to work on.

Through a flamboyant, thrilling and poignant selection of costumes, instruments, hand-written lyric sheets, vinyl, cassettes and much, much more, the exhibition reflects the excitement and innovation of Scottish pop music from the 1950s to the present day.

But don’t be put off by the word ‘pop’ – the exhibition runs the gamut of musical styles, from the skiffle beat of Lonnie Donegan to the experimental groove of Edinburgh’s Young Fathers, taking in folk, post-punk, dance, rock and prog along the way.

Rip It Up is very different to past blockbusters. So while this time last year I was researching stories from Scotland’s turbulent past (oh, and interviewing Outlander cast members) for Bonnie Prince Charlie and the Jacobites, this year it’s all pop stars and playlists.

To support the exhibition, our online content has all been focused on encouraging people to share their love of music, by contributing tracks to our Ultimate Scottish Playlist (is your favourite song there? If not, nominate it!) and by sharing their memories and experiences on our social media channels. This short video on Facebook, for example, prompted a wonderful array of first gig memories, from the Beatles at the Edinburgh Playhouse in 1967 (‘Omg but was it fabulous !!!!!’) to the Red Hot Chili Peppers in 2003 (‘For me it was life changing but others might find them embarrassing!’)

To amplify this, we wanted to create an online interactive that played on this love, and also on the idea of music as a spiritual home and fellow music lovers as a tribe.

Joi Polloi therefore came up with the idea of creating a snappy, shareable quiz playable on mobile or desktop that would reveal the player’s ‘spiritual home’ in Scottish Pop: ‘Are they suited up by The Waterfront of Stadium Rock or are they better off Walking 500 Miles (and 500 more) to the land of Folk Pop. Or perhaps even they’re Only Happy When It Rains?’ they suggested in their pitch.

As the idea developed, the ‘spiritual home’ became the ‘Scottish Popster’, each outcome championed by stars featured in the exhibition.

The six popster personas are based on different areas of the exhibition, which is themed partly chronologically, but also by musical ethos. So the ‘Perfect Popster’ is a classic dancehall diva (think Lulu dancing in a miniskirt), while the ‘Punk Pioneer’ is a snakebite and black-swilling DIY music-maker with the Skids and Rezillos blasting from their turntable.

The ‘Global Superstar’ is happiest soaking up big sounds in an even bigger arena, while the ‘Scottish Scenester’ would be more at home in Anstruther nursing a pint to the strains of King Creosote.

The ‘Classic Clubber’ would be queuing up outside Glasgow’s Sub Club while the ‘Folk Hero’ would be brushing up on their Gaelic in their local record store whilst humming along to the Proclaimers.

Which are you? Check out the quiz to find out…

Two challenges faced us: a short timescale and a tight budget – not to mention competing priorities as the exhibition launch date approached. But by focussing keenly on what we could achieve within the scope of the project and being realistic about the assets we could afford (photos of popstars do not come cheap) we managed to get the quiz launched during the opening week of the exhibition.

The final quiz shows players three images to choose from – a mix of exhibition objects (such as the awesome lime green PVC jumpsuit worn on stage by the Rezillo’s Eugene Reynolds and the obligatory tartan jacket worn by the Bay City Rollers) with some stock imagery (‘devotion to the cause’ points go to Joi Polloi for making their own pint of snakebite and black, having failed to find a photo to licence!). The choice is then explained, and helps define your inner popster. 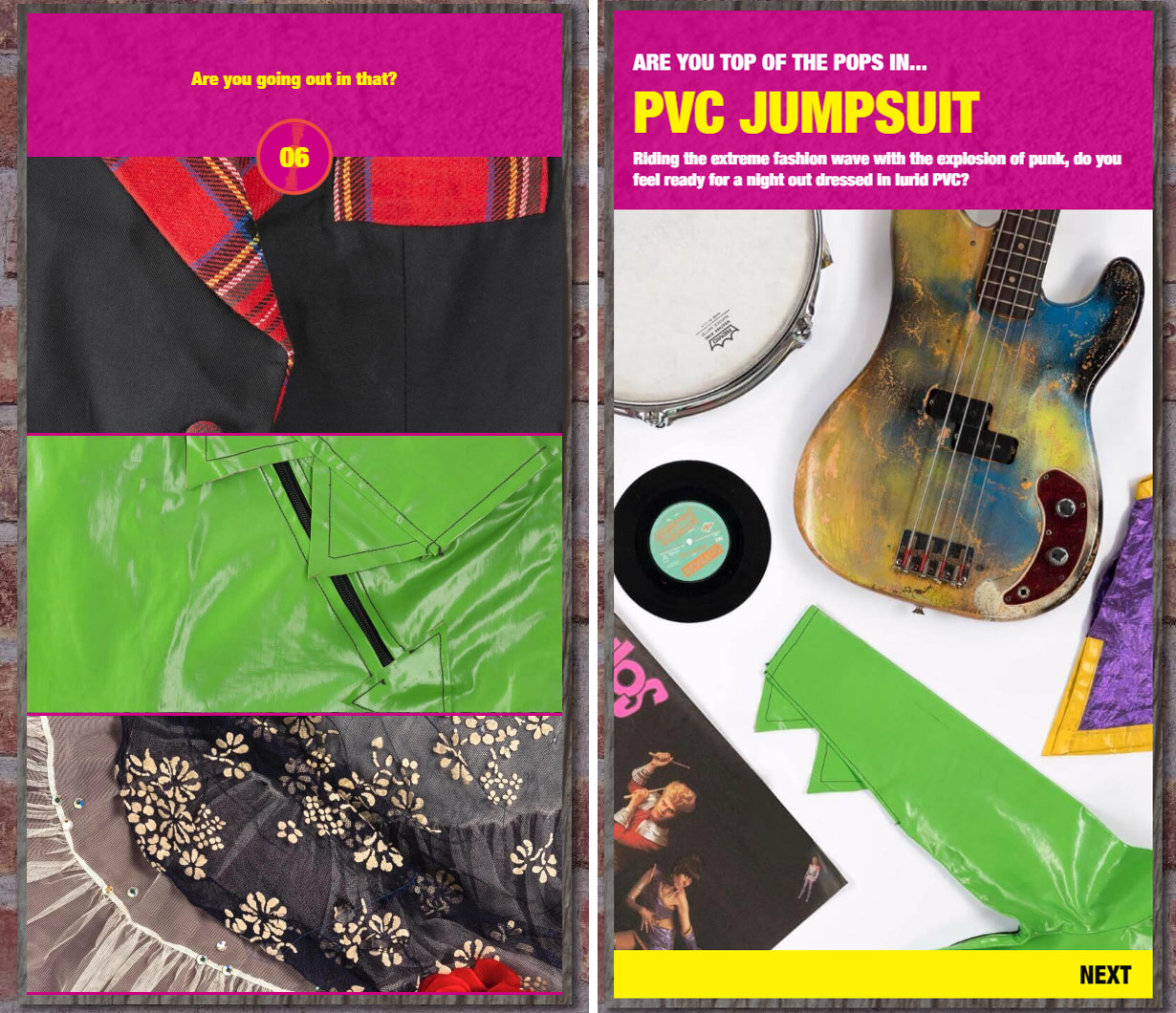 After six questions, your inner popster is revealed, and players are given the choice to share their result, check out the exhibition playlist on Spotify or (rip it up and) start again.

So far the quiz has been played over 5,000 times, with referrals coming mainly via social media, boosted by a week’s advertising on Facebook during July.

The quiz will continue to run until the exhibition closes on 25 November 2018. So have a go and don’t forget to share your result! Meanwhile, I’ll be dusting down the PVC and breaking out that blackcurrant cordial…