I have been working for a number of years in collaboration with Prof Harper from the University of Durham on the Ordovician brachiopod faunas (about 478 million years ago) of the Fezouata Lagerstätte (this German term denotes exceptional preservation), which is preserved in the Zagora Region of south-east Morocco.

The Université de Lyon 1 houses an important collection from this area, not only of brachiopods, with collections belonging to the university and collections on loan from the Cadi Ayyad University in Marrakech. I have visited the collection twice already and have borrowed material for study. This trip to Morocco was therefore the natural follow-up to my previous research trips to France. It is a very different experience to see and collect from the source what I have studied from the university museum’s drawers.

The first part of the trip consisted in joining the field excursion for the IGCP 653 (International Geoscience Programme) workshop in Marrakech. The evening of our departure for Zagora, the organisers prepared a small reception for us with a student music and vocal group performing traditional Moroccan music and a few nibbles and drinks. But the highlight of the evening was the presentation of the Palaeontological Association Mary Anning Award (awarded to a non-professional palaeontologist) to Mohamed Ben Moula, who discovered the Fezouata Biota in the early 2000s.

About 20 colleagues from around the world took part in the field excursion, and our caravan of minibuses set out in the morning. The trip to Zagora went smoothly, but after an unusually cold (and snowy) February, driving through the High Atlas was a bit more perilous. On several occasions, part of the road had collapsed in the ravine and a new road had been carved from the mountain flank. Nevertheless, the sun, blue sky and snowy mountains were an enjoyable spectacle.

The purpose of the excursion was to visit two major fossiliferous sites (Bou Izargane and Jbel Bou Zeroual) which have both yielded abundant fossils. After a couple of hours of intense activity, many fossils were excavated, mainly trilobites, echinoderms, molluscs and brachiopods.

This trip was also an opportunity to see again colleagues who live on different continents, some of whom I hadn’t seen for 10 years, and make new contacts. In particular, I was able to meet a colleague from the Czech Republic, Dr Michal Mergl, whom I know from the publications he has produced since the mid-1980s. He will join forces in describing the brachiopod fauna from the Fezouata Shale.

Then it was time to part company. The excursion party made their way back to Marrakech, while I stayed in Zagora and met a team of geologists and palaeontologists from the universities of Lyon and Brest for a full week of fieldwork. The purpose of the fieldwork was to drill and collect a rock core through the Fezouata Shale, in particular making sure it contained the horizons of exceptional preservation. Geochemists and sedimentologists from Brest and Lyon will then study the core in more detail.

After a week of work we had collected over 20 metres of core, gathered at three drilling sites. From time to time and as often as we could, my fellow palaeontologists and I, who were more interested in the fossils than in drilling rocks, had the opportunity to escape the demanding work of drilling rocks (10 litres of water per cm drilled are needed and in the desert this can be a problem). Using his knowledge of the area, my colleague Dr Bertrand Lefebvre from the University of Lyon led some of us to several fossiliferous sites, where I collected a small amount of material that complements the material already studied in Lyon, and that will be used in our research.

Additionally, we were invited to Mr Ben Moula’s workshop and shop, where an extensive array of well-preserved fossils (mainly trilobites) was on display, and then invited into his house for lunch. 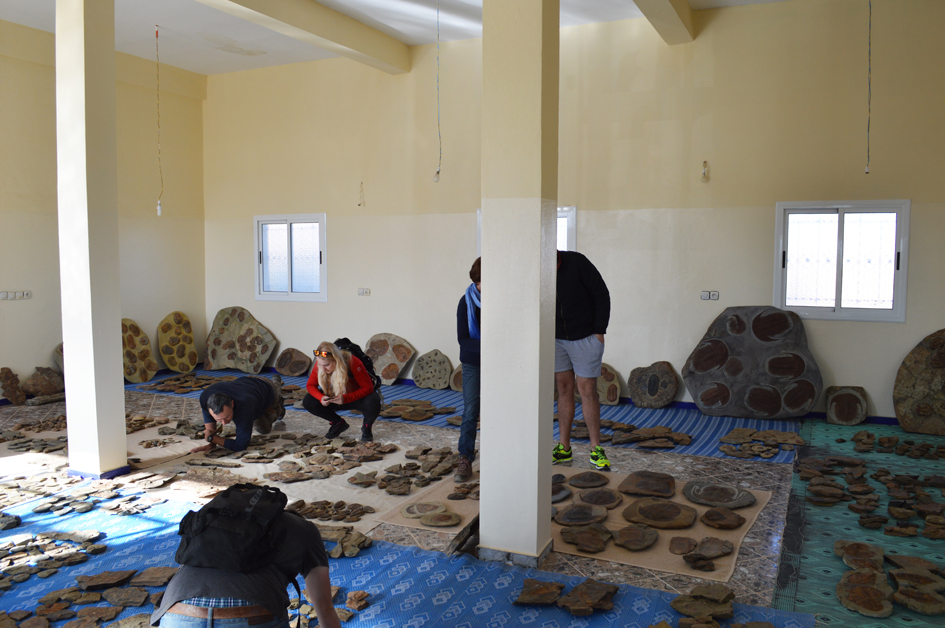 Talking of food… Moroccan cuisine is mainly known for couscous (steamed durum wheat semolina) served with a stew (meat and vegetables or vegetables only) and tagine (slow-cooked stews with meat, poultry or fish with vegetables or fruit). Tagine also denotes the shallow earthen dish with a typical conical lid, in which it is cooked and served. Simple cuisine but delicious! Moroccan cuisine and cuisine from the Maghreb in general is a mixture of Berber, French, Mediterranean and Arab-Andalusian cuisines and this is what that I sampled during my stay.

Then it was sadly time to go back home: after three flights, 16 kg excess luggage and 13 hours spend between airports and planes I was back in Edinburgh. Next stop Yale Peabody Museum of Natural History in New Haven, Connecticut…