In 1882, the Aesthetes were a group of people who might best be described as the ‘hipsters’ of their day. Admired and satirised in equal part by the popular press, Aesthetes were devotees of a movement in the arts and literature which believed that art should be valued for its own sake rather than for any moral, political or ‘improving’ purposes. This philosophy is referred to either as Art for Art’s Sake, Aestheticism or the Aesthetic Movement.

The 1882 Royal Worcester Aesthetic Teapot is, without doubt, the most iconic design object associated with British Aestheticism. The teapot is a satire on what was seen at the time as the ‘affectation’ of the Art for Art’s Sake movement; the self-styled ‘sensible’ and ‘manly’ world of the Victorian mainstream press saw Aesthetes as effete poseurs. 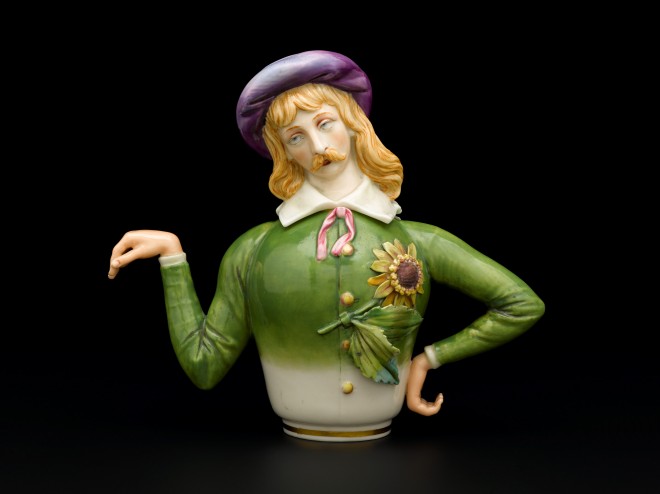 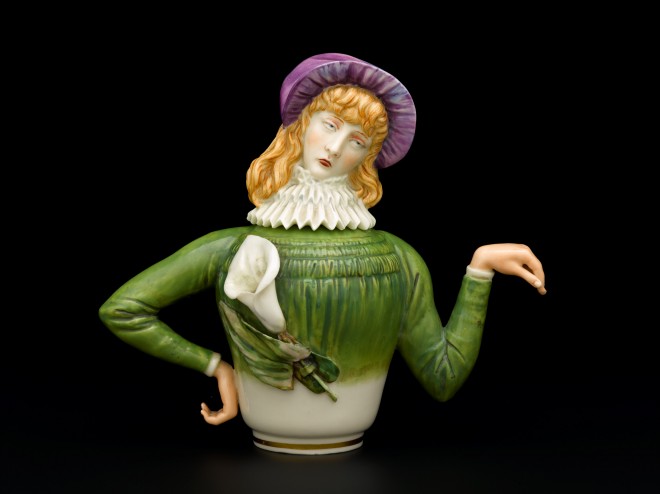 The teapot was particularly inspired by Gilbert and Sullivan’s 1881 opera Patience, which very lovingly satirised the excesses of some Aesthetes of the 1880s. Particularly the most famous Aesthete of them all, Oscar Wilde, who was at that time dressing in velvet breeches, lecturing on the topic of Art and supposedly quipping that he was “finding it harder and harder every day to live up to my blue and white china”.

Indeed, the collecting of antique Chinese and Japanese blue and white china was highly popular amongst the Aesthetes, with famous names such as James McNeil Whistler, Dante Gabriel Rossetti and Wilde all competing against each other for the rarest examples. This collecting craze was dubbed ‘Chinamania’ by the celebrated cartoonist George Du Maurier, and his witty depictions of the passions and affectations of ‘Chinamaniacs’ and ‘Intense Aesthetes’ in the pages of the Punch were highly popular during the 1870s and 1880s.

Both the male and female depicted by the Royal Worcester teapot are dressed in stereotypical Aesthetic clothing, reflecting the popularity of what Gilbert and Sullivan satirised as the “greenery-yallery” colours (such as sage green and mustard yellow) that were so popular amongst Aesthetes, and the lily and sunflower so delicately modelled here were the two iconic floral symbols of the Aesthetic ‘craze’ of the late 1870s and early 1880s.

However, the teapot does not only refer to the Aesthetic craze of the time. Underneath is an inscription which reads: “Fearful consequences through the laws of Natural Selection and Evolution of Living up to one’s Teapot”. 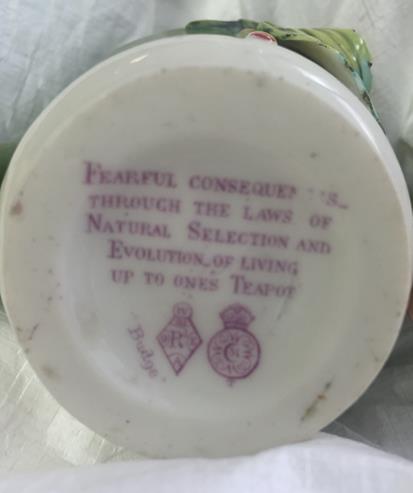 This inscription was a satirical comment both on Oscar Wilde’s tongue-in-cheek quip about his blue and white china, and also on the hysterical fears circulating in the 1880s about the effects that effeminacy and the blurring of gender roles might have on the future British population.

This inscription therefore also references Charles Darwin’s On the Origin of Species (1859) and theories of ‘Social Darwinism’ which followed it, which feared that any disruption of the social order, including gender roles, might cause the decline of Britain’s influence and Empire.