When most people think of the Gothic Revival of the late eighteenth and the nineteenth century in Britain, they usually think of the serious, spiritually-minded architecture and designs of A.W.N. Pugin (1812-1852), most famously seen in the interiors of the Palace of Westminster.

However, the architect and designer William Burges (1827-1881) had a much more playful approach to his work, and possibly to life, if this portrait of him as a court Jester is anything to go by.

His Gothic Revival buildings and interiors were incredible confections that, although inspired by thirteenth century French architecture, went far beyond anything actually created in the Middle Ages, drawing in influences from the Middle East and the Far East, as well as Burges’s highly vivid imagination.

This stoneware, painted and gilded vase, which has been acquired by National Museums Scotland thanks to the generous assistance of the National Heritage Memorial Fund and National Museums Scotland Charitable Trust, is a truly rare example of Burges’s eclectic whimsy in ceramic form; only four known ceramics by Burges exist, and all four were created in in 1874 as a set of vases designed for Burges’s fantastical Summer Smoking Room at Cardiff Castle.

The vases combine Chinese ceramic forms with Middle Eastern Iznik designs and colours, the European medieval love of exotic birds, and gilded heraldry relating to the Scottish Bute family who commissioned them, and are emblazoned with the date 1874. The other three vases can be seen at the National Museum of Wales, The Higgins Art Gallery & Museum, Bedford, and the V&A.

Like so many artists before and after him, William Burges was able to create his wildly imaginative buildings and designs because of aristocratic patronage. In 1865 he met John Patrick Crichton Stewart, 3rd Marquess of Bute, whose family’s considerable wealth, derived from the coal fields of South Wales, made him the richest man in Britain, if not the world. Both men shared a passion for the architecture and design of the Middle Ages, and this meeting led to a fruitful collaboration that lasted until Burges’s death in 1881. 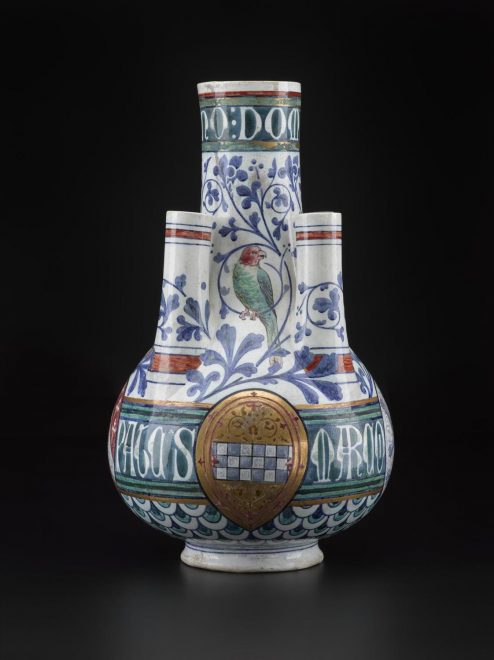 The 3rd Marquess was unimpressed by the restoration work that the 1st and 2nd holders of his title had completed on Cardiff Castle, which was one of several grand residences owned by the Bute family, and so he commissioned Burges to remodel the Castle in his wonderfully fanciful version of Medievalism. Burges was given free rein to reimagine the Castle’s architecture and interiors, including textiles, wall coverings, furniture and ceramics,  and in 1868 work began on the Clock Tower, which contained the (then bachelor) Marquess’s private apartment.

As part of this very Victorian bachelor pad, Burges designed both Winter and Summer Smoking Rooms. Smoking rooms, which often had an ‘Eastern’ feel to their designs, which were spaces where men could hang out and smoke cigars, cigarettes and pipes, became highly fashionable in ‘artistic’ homes in the 1870s and 1880s. It is highly likely that the two rooms that Burges created for Bute, with their eclectic choice of historical and, what were seen as ‘exotic’ influences, helped to fuel this interior fashion.

The Burges vase goes on display in the Design for Living gallery at the National Museum of Scotland on Friday 30 June 2017. You can find out more about the vase here.