Many of the most iconic objects on display in the Early People gallery at the National Museum of Scotland were found during the 18th and 19th centuries, often during extensive programmes of agricultural improvements or the creation of railways and canals.

Examples include almost all of the massive silver chains, the Hunterston brooch and the hoard of silver from Norrie’s Law in Fife. While the objects themselves survive, we often know virtually nothing of why or how they were buried or lost. Without the information that modern archaeological excavation provides, we lack a vital part of the story. However,  sometimes revisiting an old ‘findspot’ and reconstructing the discovery can pay dividends. This is the case with an important hoard of silver from Gaulcross in Aberdeenshire.

In 1837 labourers were instructed by a tenant farmer to remove two stone circles at Gaulcross so that the land could be cultivated. At some point during these works many pieces of silver were reportedly found. Only three pieces from this discovery survive today, and these are on display in the National Museum of Scotland. They are: a silver handpin (so-called because the pin’s head looks like the palm of a fist), a unique complete silver spiral bangle, and a unique piece of silver wire chain made by a method called trichonopoly.

Beautiful and impressive, but a bit of a mystery. Accounts of the discovery hint at a much larger hoard, but what else might it have contained? The handpin from Gaulcross provided a link to the hoard of silver from Norrie’s Law, itself a poorly understood discovery of the early 19th century, which contains a very similar pin. Our ongoing work on the Norrie’s Law silver has also suggested a further link – it contains pieces of chopped-up bangle similar to the complete example from Gaulcross. But the Norrie’s Law hoard is mostly made up of broken and cut-up objects, around 170 in total, quite different to the Gaulcross hoard as we knew it. So while these two hoards have long been linked, it hasn’t been possible to say much more about the connection.

Documentary research by Martin Goldberg, senior curator at National Museums Scotland, enabled the 19th century find spot at Gaulcross to be located, and in 2013 the Glenmorangie Research Project, in collaboration with the University of Aberdeen’s Northern Picts Project, revisited the site. The aims were to try to locate the positions of the destroyed stone circles, to look for features relating to the antiquarian discovery of the silver, and to see if any evidence of the hoard’s early medieval deposition (such as a pit) might still survive.

The fieldwork included a geophysical survey, as well as systematic metal detecting and recording to plot and identify any metal finds that might have been missed by the 19th-century labourers. Unfortunately, no archaeological features were found that could confidently be linked to either the burial or discovery of the hoard. Nor was there much trace of either of the two destroyed stone circles – the 19th century labourers were clearly thorough in their work – though a few prehistoric stone finds might perhaps relate to this early phase of the site’s life. What the team did discover was – thrillingly – around a hundred fragments of silver, probably small pieces from the same hoard that were missed by the workmen in 1837.

This new material from Gaulcross is an important element of the Glenmorangie Research Project’s current work on Scotland’s early silver. We are beginning the lengthy process of assessing and cataloguing the hundred pieces, which involves examination by eye and under magnification, scientific analysis of the composition of the silver, and research to identify relevant objects from elsewhere. It will be some time before this process is complete, but early results are exciting.

Amongst the hoard are eight Late Roman coins – siliquae ­– which date from the late 4th to early 5th centuries AD. The coins have had their edges clipped, carefully and leaving the emperors’ faces intact – this was done to gather silver to make new coins and indicates that the raw material was becoming scarce in Late Roman Britain. Only ten other examples of these coins are known from Scotland, meaning this new group from Gaulcross are important in their own right, as well as providing datable material for the deposition of the hoard.

There are other pieces of Late Roman silver too – a strap end, several fragments of what would originally have been prestigious tableware and parts of spoon handles. It is likely that more Late Roman silver will be found once analysis of the composition of undiagnostic pieces of silver has been completed.

But Gaulcross is not a hoard of Late Roman silver, like the treasure from Traprain Law (East Lothian) – there are also local types, such as part of a zoomorphic penannular brooch (so called because the terminal is a subtle and abstracted representation of a beast’s head). Some of the objects are demonstrating further links between the Gaulcross silver and the Norrie’s Law hoard, including fragments of a particularly impressive type of brooch with a twisted hoop and large undecorated terminals – this kind of brooch was previously only known from the Norrie’s Law hoard.

Apart from containing some of the same types of objects, a more fundamental similarity between the two hoards is emerging: both are clearly mostly made up of broken and hacked up objects. This was not apparent before the discoveries in 2013 and 2014 – the 19th-century finds from Gaulcross implied a hoard of whole objects – and as a consequence how we interpret both groups of material is also changing.

Our current work on the Norrie’s Law hoard aims to emphasise its hacksilver – previously, the small number of complete objects, including a symbol-decorated plaque, have tended to steal the limelight. It is mainly composed of small pieces of silver, many of which have fold marks that indicate they were once part of small parcels of silver; all are now unfolded, and this probably happened shortly after the hoard was found in 1819.

Amongst the new Gaulcross material are intact hacksilver parcels, including some made from the type of bangle only found in these two hoards – several of these parcels also have coins incorporated within the folds.

Gaulcross also contains something missing from the surviving Norrie’s Law hoard – ingots. These are bars of silver, melted down and formed into uniform shapes which would be destined for the silversmith’s crucible, to be melted down and made into something new. And that is what both of these hoards are about: they are a snapshot in the life of a raw material: old or outdated objects hacked into pieces and treated as bullion, well on their way to being melted down and made anew into the latest fashion (bangles, pins or whatever else was ‘in’ at the time). Until now, Norrie’s Law had been unique – it was the only such hacksilver hoard of this date from Scotland. Now we have a second example in the material recovered from Gaulcross.

Silver arrived in Scotland with the Romans and it appears that native sources were not exploited until the Medieval period. This Roman silver was all there was available until, that is, the Vikings arrived towards the end of the first millennium AD with their own new supplies. So the first silver in Scotland was repeatedly hacked up, melted and made into new objects. Then this process was repeated, perhaps countless times, over the next four or five hundred years.

What we have in the Gaulcross and Norrie’s Law hoards are two very similar snapshots in this process of recycling. From the pieces of (undiluted) Late Roman silver and the date of some of the ‘new’ objects it was made into, it would seem likely that these snapshots are from relatively early on in this sequence. This is very exciting, putting the two hoards in the 5th or perhaps 6th centuries AD, during which time the building blocks for the Early Medieval kingdoms of Scotland were laid. Similar hoards of silver were also being gathered together and buried elsewhere along the fringes of the crumbling Roman Empire, for instance in Scandinavia, and we will be turning our attention to the international context of the Gaulcross and Norrie’s Law silver over the coming months. 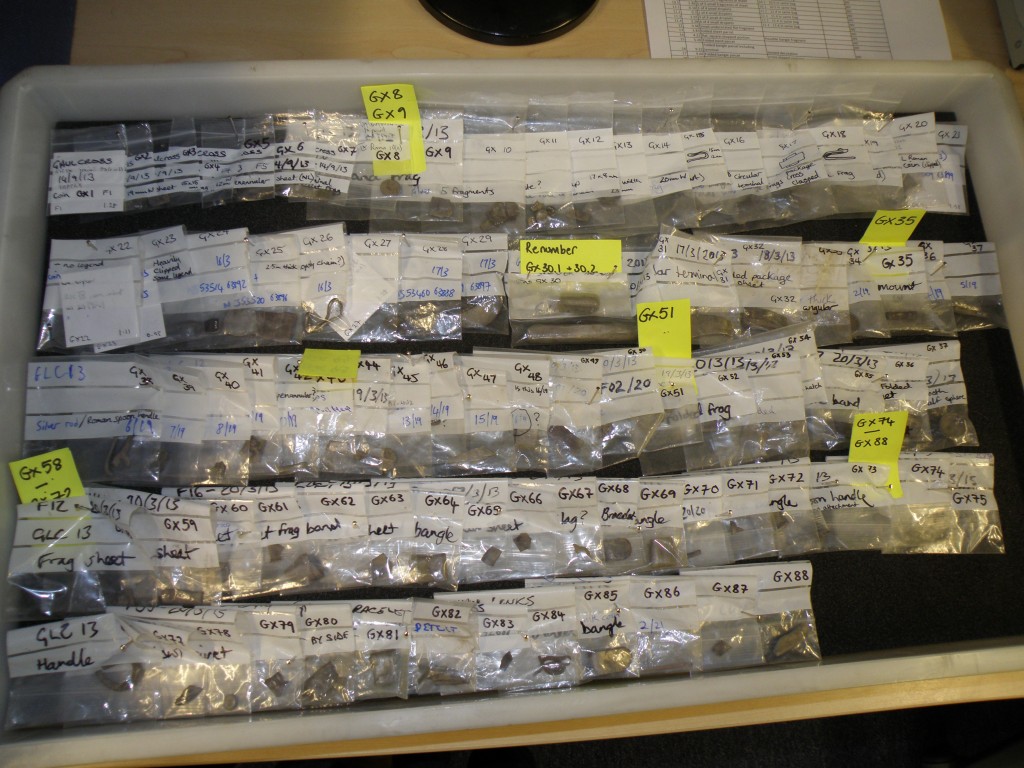 But in the meantime, it is back to cataloguing for me!

The Glenmorangie Research Project  aims to extend our understanding of Scotland’s Early Medieval past and was established in 2008 following a partnership between National Museums Scotland and The Glenmorangie Company.  The current phase of research, Scotland’s Earliest Silver: power, prestige and politics will look at the biography of this precious metal as it was used and reused in Early Medieval Scotland.

Thanks to our collaborators at the University of Aberdeen Northern Picts Project.

Scotland’s Early Silver exhibition is at the National Museum of Scotland until 25 February 2018 and follows three years of research supported by The Glenmorangie Company.