An insight into the conservation of daguerreotypes for a Victorian photography exhibition.

The exhibition Photography: A Victorian Sensation will present different types of objects ranging from early cameras and photographs to works of art on paper.

This exhibition has required intense activity from all our conservation teams. Within the Paper and Textile Conservation Studio we have worked on a vast range of objects including photographs and pamphlets.

We have also had the opportunity to work on many daguerreotypes which are very intricate and complex to handle.

The daguerreotype was the first patented and publically announced photographic process. It was announced in 1839 by one of its French inventors Louis Jacque-Mandé Daguerre, and given freely to the world, except for England, where it was patented, meaning that users had to pay for a licence to practice. It was patented in Scotland, too, but the patent was never enforced. 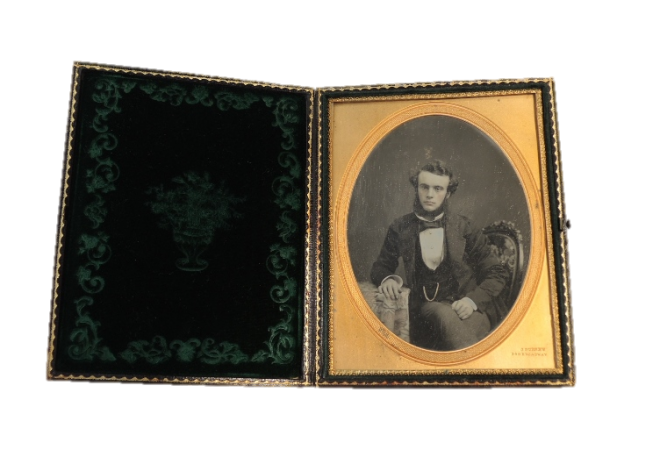 Let’s look at the technical side: it is a photograph on a copper plate that has been prepared by covering it with a layer of polished silver made photosensitive by exposure to vapours, produced by a few crystals of iodine.

When ready to use, the plate is placed in a camera and exposed. Depending on the light conditions, it could take up to 30 minutes to get a latent image on the earliest daguerreotypes; this explains the unnatural look that most subjects have, as they had to stay still for such a long time. The image is then revealed with vapours of heated mercury (best not try this at home as this part of the process poisoned many of the first photographers).

You can recognise a daguerreotype by its mirror like appearance as well as the peculiar feature of being able to see both a negative and positive image depending on the light you see it in.

Daguerreotypes are usually displayed in a decorated case with velvet borders and cushion. They are taped with a protective glass and passe-partout (also called mat); a preserver is then clasped around the ‘sandwich’ to ensure a complete seal, and decorated.

Most of the daguerreotypes we worked on were in good condition.

These stains were explained to us as being glass disease.

What is glass disease? It is the deterioration of the glass due to its composition, with soluble salts moving to the surface of the glass and crystallizing. This is due to variations in the relative humidity, which is the percentage of moisture in the air.

How did we treat this?

To access the glass disease we had to remove the daguerreotype from its case. We then separated the various elements and washed the glass in a bath of water, letting it dry overnight.

Conservation tape was then used to reassemble and seal the sandwich back together, finishing off by placing it in its preserver and back in its case.

This treatment sadly only removes the evidence of glass disease as the issue is inherent to the glass manufacturing process itself. It is only by maintaining the daguerreotype in a stable environment that we can prevent the glass disease from appearing again.

Photography: A Victorian Sensation opens on 19 June. To find out more, see our website.