2014 marked the UNESCO International Year of Crystallography, which celebrated the Centenary of the award of the Nobel Prize for Physics to Max von Laue for “the discovery of the diffraction of x-rays by crystals”. This ground-breaking work marked a sea change in science and in crystallography in particular. It was the moment when we moved from describing crystals in terms of their external features to looking at the internal (crystal) structure

To commemorate this momentous year, a project was initiated to properly sort, curate and conserve the substantial collections of crystal models held by both the Departments of Natural Sciences and of Science and Technology at National Museums Scotland.

During 2014, we were lucky to acquire the services of Tatiana Martinez Riera a recent graduate from the Universitat Politechnica de Valencia who came to the museum as part of the Erasmus scheme to work on the conservation of the models. In Part two of this article I will give more details of the project but I wanted to give people a little introduction to Tatiana’s article, which I have added below.

Conservation of the crystal model collection

I am a Spaniard and I have just completed my studies in Máster en Conservación y Restauración de Bienes Culturales. I came to National Museums Scotland as an Internship on the Erasmus Scheme with the agreement of the Universitat Politechnica de Valencia to work on the Crystal Models Project.

In nature, minerals can take on many shapes and forms and these have fascinated humans for centuries. As we learned more about these crystals the science of crystallography was developed to explain the differences and similarities between crystals. In order to both teach students and to demonstrate the different crystal systems, models were made in a variety of materials.

Crystal models were used in the past to study and to teach. There are crystal model collections in many museums in the United Kingdom, Europe and also around the world. The Crystal Models Project was started in 2014 in recognition of the UNESCO International Year of Crystallography. The study of these wonderful models is becoming more important as researchers come to appreciate their scientific and historical value. Other students and researchers from several museums around Europe are looking at crystal model collections and their history. By systemising these collections, researching the different makers and comparing them with other collections, a better picture is building up about the history of crystal models and their makers.

At National Museums Scotland, the Department of Natural Sciences has a collection of more than 2,000 individual models. These models are beautifully made and they have a huge artisanal value. As the Museum develops this project and links up with other museums and researchers, they are hoping that at some point in the future, a conference or symposium can be organised to give researchers an opportunity to discuss their own projects.

It is estimated that the oldest part of the crystal models collection dates from the 18th century, although the collection has models from several different periods. The collection is stored with the mineralogy and petrology collections at the National Museums Scotland Collection Centre in Edinburgh. The collection comprises hundreds of samples made in different materials such as wood, steel, lead, metal, card, ceramic, porcelain and paper. It was built up over the years by the addition of several smaller collections from a number of different sources.

The project comprises two main parts. One was the sorting and cataloguing of the current collections into different sets according to maker or origin, as well as researching the background to the collections. The second part was the conservation of the models, to preserve the samples in the best condition for future generations. In addition, a small but important part of the conservation part of the project was to prepare some of the models for inclusion in the new Science and Technology galleries at the National Museum of Scotland.

During the conservation process, the models were carefully cleaned, taking great care to conserve all the inscriptions and original labels and to ensure that the separate pieces of some models were kept together. New packing methods were introduced to help protect the models from rolling and striking other models in the storage drawers. In some cases special attention was needed where, for example, labels need to be repaired, cleaned and reattached. 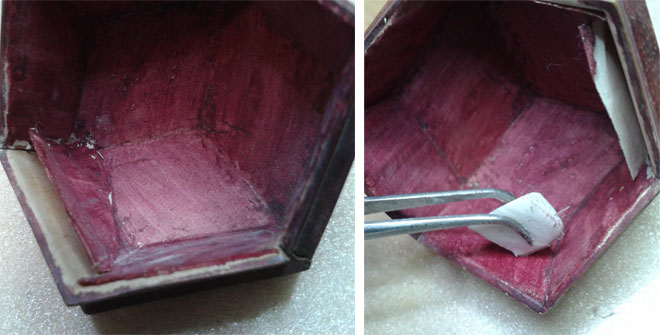 One unusual model in the collection was a pyramid composed of lead shot on a wooden base. This model required extensive work as it had corroded and undergone some serious damage. In addition, lead can be a serious danger for health, so extra security measures had to be taken. The white corrosion on the lead shot was analysed using x-ray diffraction (XRD) with the help of curator Peter Davidson, who is responsible for the collection. The lead crystal model was carefully dismounted to execute an electrolytic consolidation by means of potentiostatic reduction. This process and conservation work proved to be successful. Finally, the most corroded pieces were replaced and the model was re-assembled and will probably be one of the pieces exhibited in the new galleries.