This unique, stylish, pink ‘Atomic age’ jukebox was recently conserved at the National Museums Collection Centre. The jukebox will be featured at the Rip it Up exhibition, which will tell the story of Scottish pop music from the 1950s to the present day.

The jukebox, from the Science and Technology collection, was manufactured in Bristol between 1959 and 1962. It was designed by Jean Foufounais and Andre Deviaz in 1954 and it was named after Foufounais’s wife Chantal. The jukebox can play 200 records – in a rather interesting way, as the vinyl spins vertically rather than horizontally. You can find out more about the jukebox here.

When the jukebox has arrived in the Engineering Conservation workshop it was rather sad looking, with signs of active usage. Many of the decorative wooden side panels were detached and warped as the original contact adhesive had failed.

All the loose straps were first cleaned and were then re-adhered using hide glue. This was a bit challenging as there were no straight, flat surfaces on the object. When adhering wood, clamps should be used to keep loose pieces in place while the adhesive sets. The well-stocked engineering workshops have a range of flexible plastic clamps which became extremely useful during the adhering process. 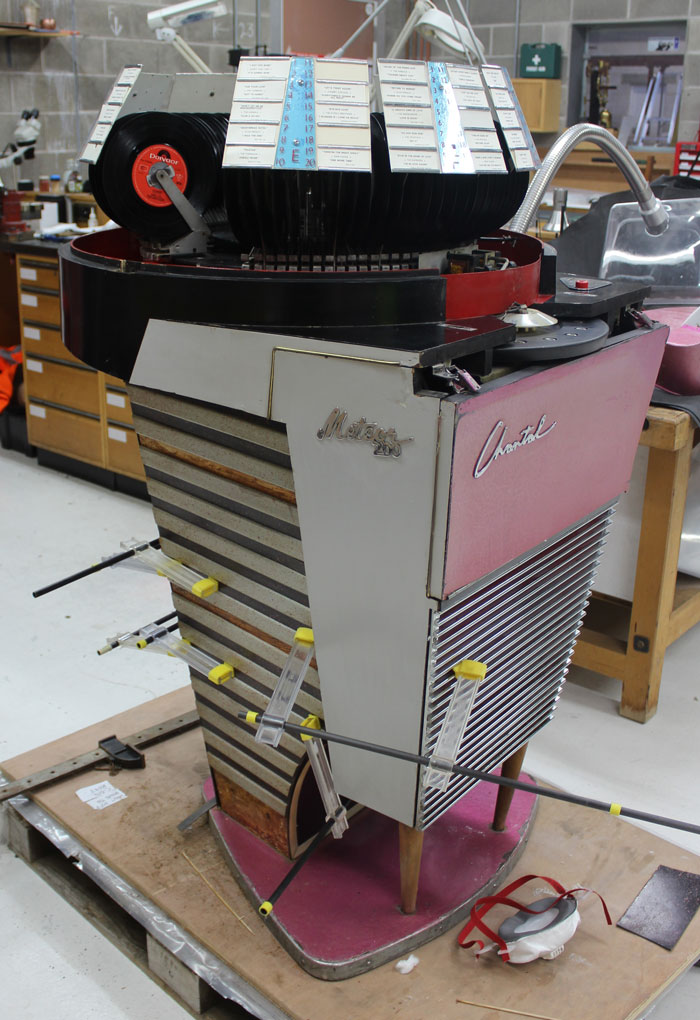 There was a yellow residue on most surfaces, most probably built up from nicotine and tar. There were a couple of burned holes on the Perspex dome as well, indicating extensive smoking next to the machine.

Most of these areas were left as they were, to show the object’s history, although we removed the deposit of residue from the pink painted surfaces, as it gave a disturbing, patchy appearance.

After solubility tests were carried out, the pink areas were cleaned with a gel, created from Methanol and Laponite synthetic resin. This was applied many times until the dirt residue could be removed. A gel was considered to be more effective than a solvent on its own. This is because gels can stay on the desired area only, and the solvent content evaporates less quickly when exposed to the air.

The Perspex dome was scratched in many areas. The scratch marks were removed using different grade micromesh abrasive papers and Greygate plastic polish. This was indeed a time consuming, exercise!

There were old fillings on both side panels of the object. These fillings were removed and replaced. Flugger acrylate filler was used on wooden areas where material loss had occurred. These parts were then colour matched with a mixture of acrylic paint.

There were a few other areas where colour matching or replacing old repairs were carried out.

Carrying out colour matching on an object like this jukebox was quite challenging, as the pink surfaces have a glossy, Hammerite finish which is extremely difficult to replicate. However, a great effort was put into the colour matching process, as you can see in the images above.

The jukebox is now clean and conserved and ready to be part of the Rip It Up exhibition, which runs at the National Museum of Scotland from 22 June until 18 November 2018.