So first, a little bit about myself… I’m Ed Ivimey-Cook, a 3rd year PhD student from the University of Edinburgh studying evolutionary biology, particularly pertaining to maternal effects and ageing. As part of my PhD, it is a requirement to complete a three-month internship in a non-academic environment. For me, this internship involves spending three months digitising the Lycaenidae family of Lepidoptera at the National Museums Collection Centre, starting with the highest priority species under the British Action Plan.

Science communication is at the heart of the Edinburgh International Science Festival, with the focus to get the public of all ages and backgrounds involved and enthusiastic about science and technology. One of the many events organised by the National Museum of Scotland during this two-week festival is “Spark Cart Science”, where every day a new expert introduces and educates the public about a new scientific or technological concept. The concept we were presenting revolved around the process and benefits of digitising the vast collection of Lepidoptera, specifically the Lycaenidae family.

We were showing visitors how to turn a physical butterfly specimen into useful data, which would then be accessible for a multitude of people, from the public to citizen scientists and researchers. On display we had a beautiful collection of Maculinea arion (Large Blue), the largest and rarest of our UK butterflies, accompanied by previously photographed images for the public to transcribe data from the labels into an Excel spreadsheet, thereby turning citizens into scientists! As well as getting the public involved in the process, we explained the useful benefits of digitisation, from preserving specimens in collections to disseminating important historical, geographical and morphological data for everyone to access. 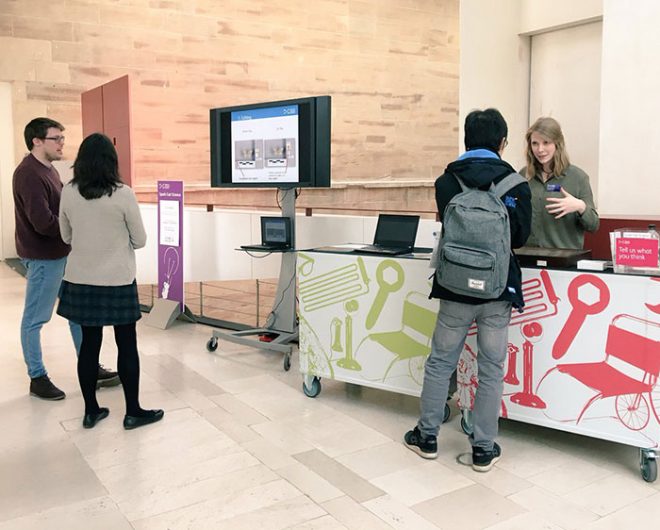 Events like these are not only hugely important for disseminating science (particularly the Natural Sciences) to a wider audience but, judging by the crowds of people flocking to the museum throughout the week, also a tremendously successful method of getting people engaged and inspired by science.