As part of ten exciting new galleries opening at National Museums Scotland in 2016, British aviation pioneer Percy Pilcher’s famous glider the Hawk will go on display. Pilcher (1867-1899) broke the world distance record with this glider in 1897, flying unpowered for 250 metres.

But a tragic accident in 1899 saw Pilcher plummet to the ground with the Hawk still on top of him, badly damaging the glider and leading to his death a few days later. Even after the Hawk‘s untimely crash, it continued to have an interesting history right through the 20th century. It was originally given to the Aeronautical Society of Great Britain and exhibited in its damaged state. In 1909, the glider was restored and loaned to the Royal Scottish Museum, on display there until 1911. 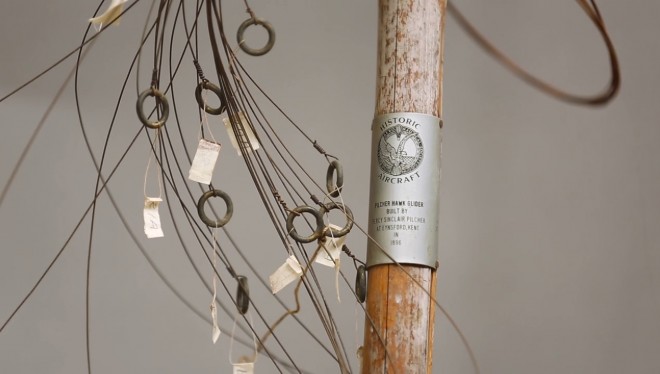 Shortly after, it was loaned to the Scottish Aeronautical Society for the 1911 Scottish National Exhibition in Glasgow. And then tragedy struck again… In November 1911, the building housing the Hawk was wrecked during a storm, damaging the glider again. The Royal Scottish Museum restored the Hawk and it stayed on display with them until 1939, in the Museum’s Machinery Hall. When the Second World War broke out, the Hawk was put into storage, where it was found that the fabric wings had deteriorated. Keen to maintain the glider in working order, it was sent to The Shuttleworth Trust where it was restored once more and its wings replaced.

As you might have guessed, in order to display a delicate object like the Hawk again as part of our new galleries, it requires further conservation treatment. This is an exciting project which involves plenty of research into the life of the glider, in order to try to decipher which parts are original and which are alterations made during previous restorations. Areas of deterioration on the glider include dirty sails which are positioned wrongly, corroded bracing wires, and broken bamboo. After some interesting research and planning, the conservation is now underway!