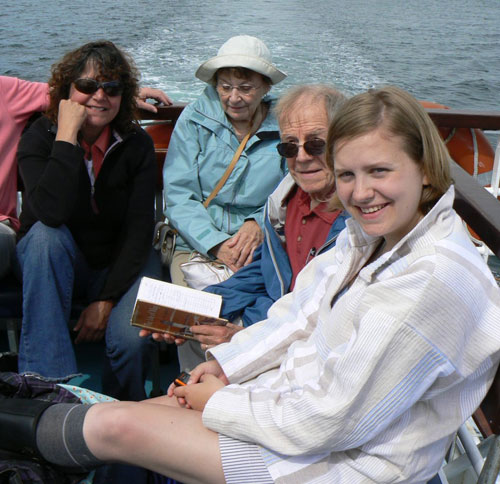 It is both great fun and a privilege to have the chance to tell my family’s story of survival, rescue, and romance in the run up to the opening of Shining Lights, an exciting exhibition devoted to Scotland’s lighthouses, coming up in October at the National Museum of Scotland.

My ‘three greats’ grandmother, Lucy Anderson Dowie, was born in 1790 on the Isle of May, the last child of eight. Her father, George Anderson, and his father, James, both keepers of the May light, were also born on the May. Lucy was barely one year old when a violent storm hit the area, ripping iron ornaments from churches in Edinburgh, and flooding houses throughout Fife.

On Sunday evening, January 23, 1791, George, his wife, and their six youngest children went to sleep as usual on the second floor of the tower. The storm raged on and at some point, the assistant keepers were forced to retreat from their task of tending the light. The coal brazier was extinguished, and the winds forced the coal ash lying about the tower into its tiny rooms, filling them with smoke.

Back on shore a group of concerned citizens noticed the light out on Monday. The storm finally died down enough by Wednesday so that a rescue boat filled with men was able to make its way out to the island. The assistant keepers were found alive, but dizzy from the coal fumes. The discovery of the family, mostly all of them perished, must have been a grim one. But nestled under the covers, barely alive at her mother’s breast, was little Lucy. She was brought back to shore, and, some years later, married one of the men who had been in her rescue ship, Henry Dowie, my ‘three greats’ grandfather!

In 1811, with the first three of their 12 children in tow, Henry and Lucy sailed over and settled in the (then) brand new village of Andes, New York.  Henry Dowie made a name for himself in business and local government. And, like Lucy, my ‘two greats’ grandma, Sarah Booth Dowie Acker, was Lucy and Henry’s last born daughter. Sarah became a school teacher, and travelled to her students on horseback. She married a Presbyterian minister, Henry Jacob Acker, who would later serve in the Civil War. We have many of his letters and diaries.

Of Sarah and Henry Acker’s five children, only one, my great grandfather, Henry Sherwood Acker, married and had children. And Sarah’s last born daughter, Margaret Kate Acker, also a school teacher, and one of the first graduates of Vassar College, lived to be 100 years old. It was our Aunt Margaret (I met her just once when I was very young) who saved and handed down all of the documents that provided so many clues for all of my research and findings. Were it not for these saved documents and the fabulous resource and search engine of Scotland’s People, I could not have discovered most of this wonderful story.

I guess there is one other important ‘driver’. We — me, my siblings and Acker cousins — were told the story of Lucy and the lighthouse as small children, but I really never got interested in knowing more about it until my own son, Noah Anderson Graves — yes; middle named for Lucy and the lighthouse keepers — was born in 1993.  Such is the miracle and mystery of life: the notion of Lucy’s survival truly packed its punch when I peered into Noah’s shining little face! On a trip back to Philadelphia from a stay with friends in Cooperstown, NY, we decided to try and locate the monument in the cemetery that tells the stories of Lucy and Henry.  All we had to go on was a photocopy of the 1893 article published in the Andes Gazette.

It was a rainy day, and I was eager to get home to Philadelphia. Fortunately for all of us who are now enjoying the fruits of my subsequent research into our ancestors, Michael (Noah’s dad) has far better navigational skills than I do, and was just as curious as I was. After many rounds through the tiny village I was ready to head home. Not Michael! With his persistence we finally located the walled off section where Lucy, Henry, and many of their children and grandchildren are buried. What a find!

And our story continues, since many of the mysteries surrounding the lives of Lucy and Henry remain to be solved. Where did Lucy grow up? She had two older sisters, possibly married and living in Fife, who were not in the lighthouse that night. Where is her Scottish family buried? Probably, I think, on the May, but there is no proof of this. How did Henry ‘connect’ with her again? And where are all my fellow descendants of their many other children here on this side of the ‘pond?’

I know that in this age of Internet and split-second discoveries it is not out of the question to imagine that, with the help of interested individuals on both sides, I might get to solve many of these mysteries before I myself am scattered to the winds around the May (a flock of puffins as my escort, aye!).

Before that day, however, I hope to enjoy many more visits to this jewel of an island, including an extended stay during the (brutal!) month of January. Yes! I would love to experience the May as it was, that fateful night in 1791.