What’s your favourite film? Ok, now film yourself talking about it for 30 seconds in one shot!

That was the warm-up task we were given on the recent #MadeonaMobile film training session we ran at National Museums Scotland. Whilst racking our brains to decide on a favourite, we also held our phones up to video and interview our partner for the task.

This was followed by a quick showcase to the group, where we discussed our favourites a little more and then looked at what we did right or wrong. In the speed of the moment, did we pay enough attention to the framing of our shot and who got the style of interview pitch just right? 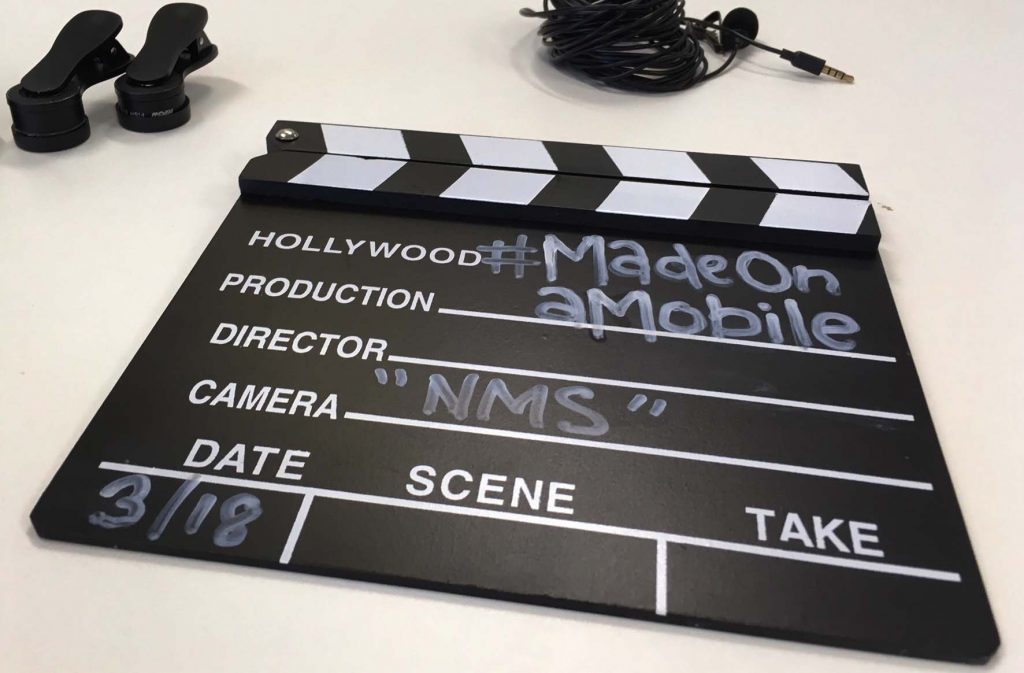 Anyone that has a smartphone can create a film on their phone, it’s not a particularly new phenomenon –  it’s simply just another way people engage with their environments these days and many do frequently.

Yet, in the museum we are sometimes still grappling with how to make the best use of this powerful piece of technology that most of us carry in our pockets or have sitting on our desks each day. As ever, it’s not just about having the tech –  it’s about what you do with it and what you think about before you hit record. 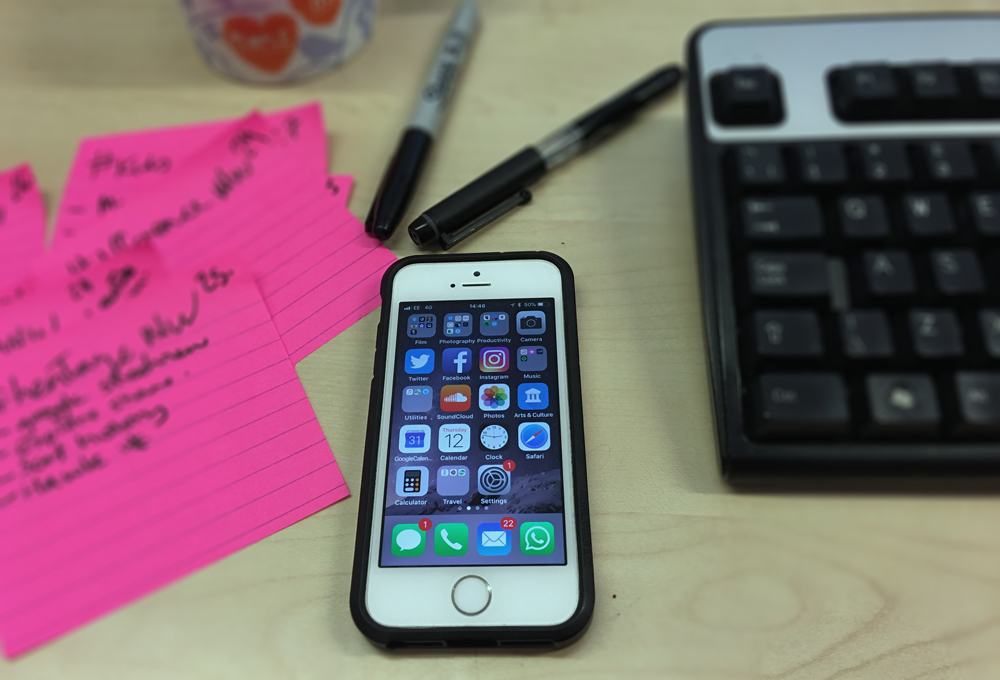 I’ve talked before about our experiments with Facebook Live video over the last few years; we shared that although we see live video as an important part of our toolset going forward, we also don’t want all videos that we produce to be live. So these are balanced amongst more developed films with longer production times and budgets. However, we’ve also realised that there is definitely a widening space in between these two places, and that there are things that we would like to capture and share quickly, even if not live directly. 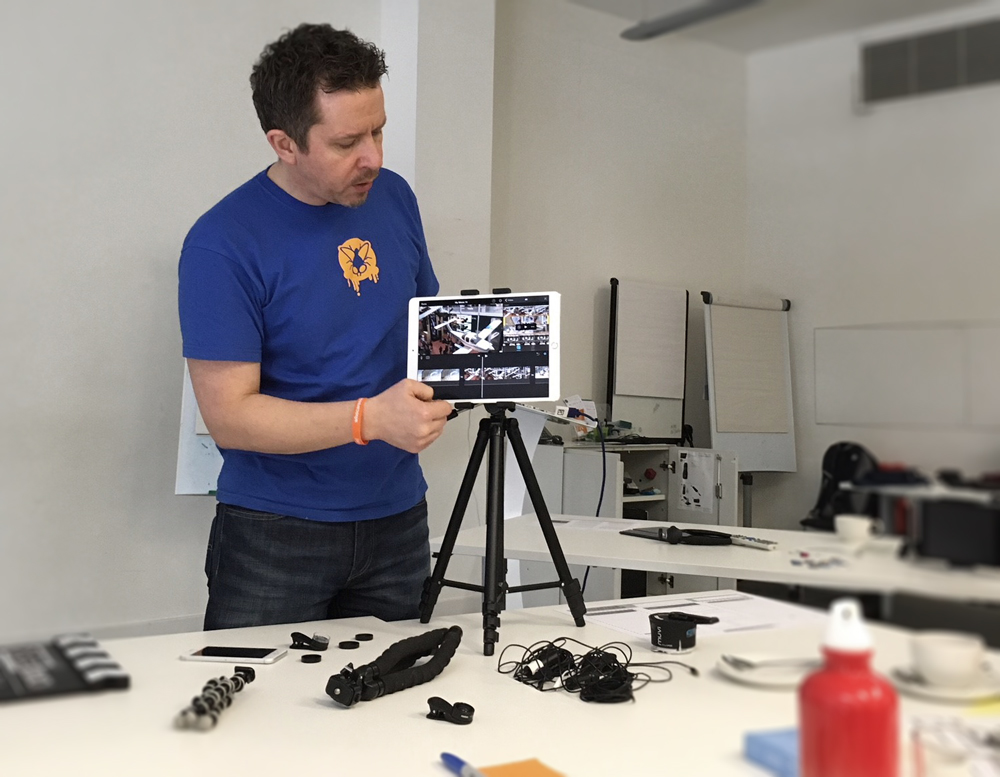 So our recent training session with the Digital Media team, plus some curators and colleagues from our Learning and Programs team, was all about filming and editing quickly on a mobile phone. We brought in Jon Gill of #Madeonamobile for this session, and he worked us through some great exercises to get us making short elements that were shot, edited and completed in less than an hour. There was a range of skills amongst the group, and whilst some people wanted to know how to do basic editing, others were looking for tips on the different shots to use, what simple kit can improve quality or simply for a bit of a confidence boost.

Jon shared some great tips about capturing different types of shot (establishing, panning, point of view and close-ups), capturing timelapse or animated elements in Imotion and editing quickly in apps like Imovie. In and amongst that, he set us three different exercises, which we then shared with the group for further critique or praise!

The group involved on the day were really positive, so big thanks to Jon for leading such an interactive session.

Great day at #MadeOnAMobile mini film school with @OnTheSuperFly. Feeling inspired for the 1st time in years to get out and get filming! pic.twitter.com/LHYPuO65Yg

We’ve already seen some new films appear from some of this group in the weeks that have followed, so watch out Mobile Film Festival!

A week on from our fab #MadeOnAMobile session with @OnTheSuperFly I made a 4 second film! 4 whole seconds, with sound effects! #edscifest #eventhorizon https://t.co/wjO5ALuVRo

1000s of balloons will be blown up by @hackenwerth & team to create the #EventHorizon sculpture in the Grand Gallery. Here are some of the first! #EdSciFest pic.twitter.com/PYKmuAPmWd

Our interactive Adventure Planet gallery is where #KidsMW can get hands on our displays! Plus our learning team are there each #FeelyFriday to help bring objects to life https://t.co/LllVuFepOB #MuseumWeek pic.twitter.com/SqYGrYCTn4

We wandered into @NtlMuseumsScot this afternoon to see this gigantic balloon sculpture! I liked that there were lots of kids lying underneath to watch it twist and twirl round. #Edscifest #Edinburgh #Balloons pic.twitter.com/xCaRsLMpjH

Plus we’ve used tips from the session, and combined a mix of mobile capture with further editing on Adobe Premier in these recent videos.