As part of the Art Fund New Collecting Award project Northern Modernist Jewellery 1945 – 1978, I have had the opportunity to engage with fellow curators, specialists and dealers within the field of Modernist Jewellery. After a short flight from Stockholm, I arrived into a sunny Helsinki where I met with some of the curators and specialists who have been advising me and also one of the designers of a piece that I had acquired for the New Collecting Award.

Finland is internationally celebrated as a site of great innovation within Modernist Design, with a strong national design identity that integrated folk heritage with a radical Functionalism from the 1930s onwards. More attuned to movements within Germany, Austria and also the United States, Finnish design became a highly influential element within Nordic Modernism. Finland was also celebrating 100 years of independence in 2017, with a series of exhibitions and events celebrating their artistic and design heritage.

Here I met with Merja Vilhunen, Chief Curator, Collections and Deputy Director, and Susanna Thiel, Curator of the Designmuseo. The Designmuseo was originally established in 1873 by the Finnish Society of Crafts and Design as a resource for the Craft School of Helsinki, the predecessor of the present day Aalto University School of Arts, Design and Architecture. Currently housed within a former school, the museum holds a collection of over 245,000 works of design, including an extensive archive of photography and drawing, and its displays highlight some of the key designers from Finland’s past to the present day.

Merja and Susanna were very kind to show me highlights from the Museum’s jewellery collection, from roughly the late 1940s to the present day. They then very kindly took me into their stores, where we were able to delve further into their extensive collection of pieces from Modernist designers such as Elis Kauppi, Bertel Gardberg, Saara Hoopea, Pentti Sarpaneva, Björn Weckström, Börje Rajalin and Paula Häiväoja.

The Museum holds a vast collection of Elis Kauppi’s work, which was generously donated by the Kauppi estate. Kauppi is highly regarded as one of the pioneers of Finnish Modernist jewellery. He started working with jewellery in 1936 and founded Kupittaan Kulta Oy with two friends after the war in 1945, leading the trend away from the popular mid-century floral patterns to the design of innovative and simpler Modernist pieces. He was one of the first within Finland to use local stones such as granite and spectrolite, which were elevated in status and incorporated into unique designs.

I then visited the National Museum Finland, which is a fascinating building designed in the Finnish Romantic style, and covered in stone carvings featuring mythological symbols and animals, with a rather wonderful bear that greats you.

It was here that I was meeting the artist and jeweller Kirsti Saarikorpi and Mari Kotka, Trade Marketing manager for Kalevala Koru Oy. An inspirational Finnish jewellery manufacturer, Kalevala Koru Oy was celebrating in 2017, 80 years since its inception. To mark this, the company has created a small touring exhibition to celebrate its history, charitable works and the designers and artists they have been collaborating with.

Kalevala Koru Oy was conceived by a group of like-minded women to raise funds to support the commission of a sculpture to represent Finnish Women. They worked with the National Museums collection of archaeological jewellery artefacts to create a reproduction range. Though the statue was not commissioned due to the start of the Winter War, the women established the Kalevala Women’s Association, a cultural organisation that looked to support charitable organisations through the sale of jewellery. Today Kalevala Koru is one of the largest jewellery manufactures in Northern Europe, and still holds to the principles of the founding women and is still run by women.

I was kindly given a tour of the display before its opening at the National Museum, where they kindly introduced me to some of the amazing Modernist pieces that were designed for the company in the 1960s. Such as the stunning necklace by Börje Rajalin seen below. 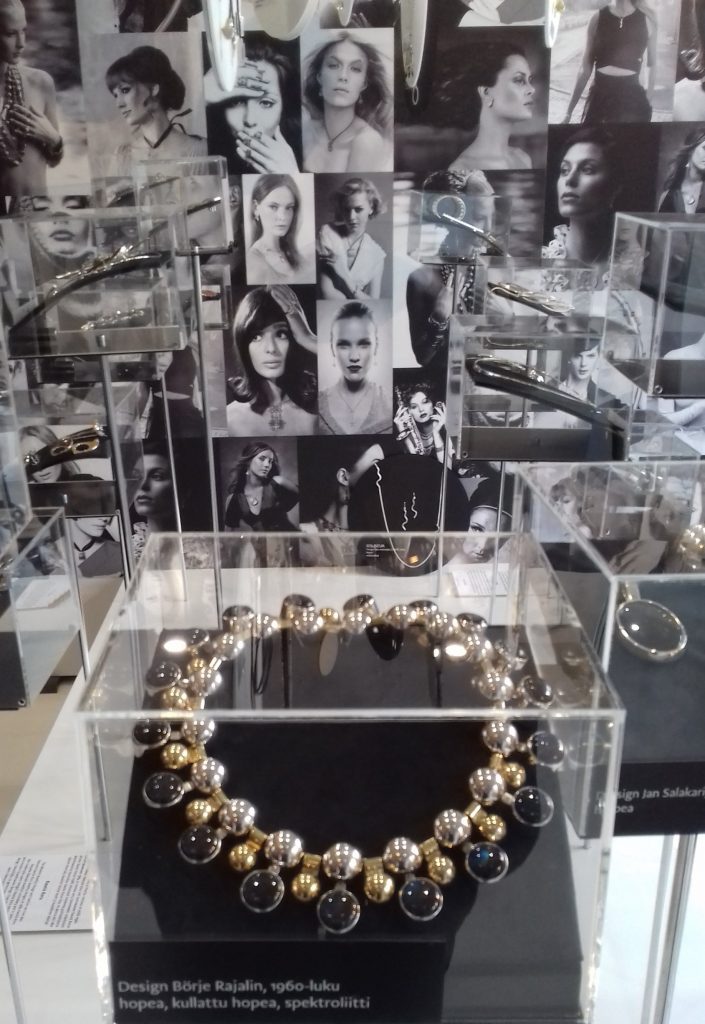 During my research, I was introduced to the author and journalist Tuula Poutasuo, who has written extensively on Finnish design for over 40 years. She has kindly introduced me to many curators and specialists in Finnish design and was instrumental during my visit in obtaining an invitation to visit the leading Modernist artist and designer Björn Weckström.

Situated not far from the town of Espoo, the artist, sculptor and designer’s home is like stepping into a Modernist wonderland, full of his design and art. Sat on sofas designed by himself, we discussed his ideas and work. Weckström was one of the first designers to really explore the properties of acrylic, incorporating it into his jewellery and furniture design as well as within his art. He told me how, after learning more about the material following a meeting with a director from ICI, he discovered that there were two companies that were able to help him, one in Britain and the other in America. It was the British company he worked with to create pieces that had a depth and a quality of glass in one regard and a look of ice in another.

He also showed me his gallery of jewellery design, which featured some of his earliest experiments from the 1950s that have never been published, and the neckpiece he was designing for Lucas Films; due to their filming restrictions they went with the existing model of Planetoid Valleys, so this new design was never worn by Carrie Fisher as Princess Leia.

It was a wonderful honour to be able to meet one of the leading Modernist Jewellery designers, who is so passionate about his art, and still producing, about to fly the next day to Italy, where he has a sculpture studio.

From here we travelled to the WeeGee Exhibition Centre, situated in Tapiola, Esppo. The impressive Modernist structure was built in the mid-1960s for the Weilin & Göös printing manufacturers. Converted in 2005 to become a major exhibition and events space, it houses four museums: EMMA – Espoo Museum of Modern Art; KAMU – Espoo City Museum, Hevosenkenkä – Finnish Toy Museum and Kellomuseo –the Finnish Museum of Horology. It is within the latter that Tuula had arranged for me to view Suomalainen Koru (Finnish Jewellery), a significant exhibition which Tuula contributed to, and was one of the authors of the publication of the same name, which marks 100 years of Finnish Jewellery production.

Tuula had kindly arranged for not only Laura Kokki, curator of the exhibition, but also Helena Pahlman, the collector, to be present to take me around and to tell me a little bit more about the pieces, of which many came for Helena’s own collection. It was wonderful to see some of the early pieces by Tapio Wirrkala that are based around Finnish folklore, which I have only ever seen in publications. Also a very startling mink and silver necklace dating from the 1970s by Weckström that I have never come across before.

It was also a wonderful opportunity to learn more about Helena’s own collection that she acquired with her late husband Lars. The Pahlmans have been key figures within the Finnish art scene since the 1970s, collecting works of Finnish Fine Art as well as Jewellery.

The display and publication (currently just in Finnish) provide a wonderful snapshot of the artistic development of Finnish jewellery manufacture and studio production.

The next day, following our return to Helsinki, I had arranged with Tuula to meet and visit a couple of artists’ studios and small galleries.

A highlight was walking through the design district of Helsinki to the coastline, to visit the studio of leading contemporary jeweller and artist Janna Syvänoja. Janna is internationally renowned for her intricate paper jewellery, which she creates by painstakingly hand cutting layers of paper from found textbooks and allowing the text and patterns to inform the shapes so the pieces grow quite organically. Her works have a wonderful ephemeral quality to them, each having their own texture and life depending on the media she uses. It was lovely to meet her and hear more about her practice and upcoming exhibition around colour tracking ephemeral materials.

On my final day, I had the opportunity to visit the Alvar Aalto – Art and the Modern Form exhibition at the Ateneum Art Museum. Alvar Aalto was one of the most influential figures in international Modernism. This outstanding retrospective presented Aalto’s life and work from the 1920s to the 1970s.

The exhibition featured a wealth of iconic objects and pieces of furniture, as well as architectural drawings and scale models. In addition, it also showed work from his close friends and Modernist masters, Hans Arp, Alexander Calder, Fernand Léger and László Moholy-Nagy, visually showing how the ideals of Modernism penetrated fine and decorative art and design.

It was a real treat to find three of Calder’s neckpieces on display within the exhibition, directly referencing their connection to his mobiles but also the artwork of László Moholy-Nagy, whose paintings were exhibited close by.

Finland has always been considered at the vanguard of Modernist design and manufacturer, with individuals such as Alvar Aalto and Tapio Wirrkala internationally celebrated; however all but a few jewellery designers have had as much recognition. With the Centenary celebrations marking the 100th anniversary of Finnish independence, a series of exhibitions at home and abroad is drawing in a new audience and recognition, allowing these individuals to be given the platform that they deserve.

The essence of Finnish design has always had a link to nature, showing how these individuals were inspired by the environment around them, but also a sense of their folk heritage. From the late 1940s, Finnish designers led the way in developing textural relief taken from bark or stone that we would come to see as part of the British Modernist aesthetic of the 1960s. However, it was also wonderful to see the sculptural works that demonstrate a correlation with the works of other Modernist designers from across the Nordic states.

I would like to thank Tuula Poutasuo, whose introductions and kind help during my stay in Finland allowed me to be able to meet so many people and see some wonderful examples of Finnish design.

Modernist Jewellery is on display until 29 April 2018 at the National Museum of Scotland.