My second assignment as Volunteer Curatorial Assistant was another inventory project, this time on the Charles Stewart collection.

(You can read about my first assignment, working with the Jean Muir Archive, here.)

Charles William Stewart (1915-2001) was more commonly known as an illustrator but contributed to one of the most significant dress collections in the UK.

Stewart’s passion for historical dress started at a young age, when he stumbled upon a china doll in a mock 18th century dress in a window on Princes Street, Edinburgh. As an illustrator, to help with historic illustrations, Stewart collected numerous items from dealers on Portobello Road in London. Charles Stewart dressed mannequins in garments from his collection for his illustrations, as this was a good way to ensure historic silhouettes, draperies and folds were accurate. What he accumulated was a diverse collection consisting of dresses, skirts, bodices, capes, hats and shoes and men’s suits from the 18th, 19th and 20th centuries, some from the most famous fashion houses in Europe.

One of the first garments I discovered was this pretty but very delicate summer dress dating to c.1876. I was instantly drawn to this day dress as it is one of my favourite silhouettes in dress history. The bodice is in the typical cuirass style of the late 1870s and the skirt has internal tapes to tie it back, creating the fishtail silhouette.

When I removed the garment from its protective Tyvek bag to measure and take pictures for inventory, attached to the bodice was the handwritten object label, written by Charles Stewart himself, giving a glimpse into the weird and wonderful life of the object before its accession into the museum collection. Stewart wrote these labels to keep track of his collections and often detailed the item’s provenance, the dealer he bought it from, date estimation and any other important or relevant information (see below). 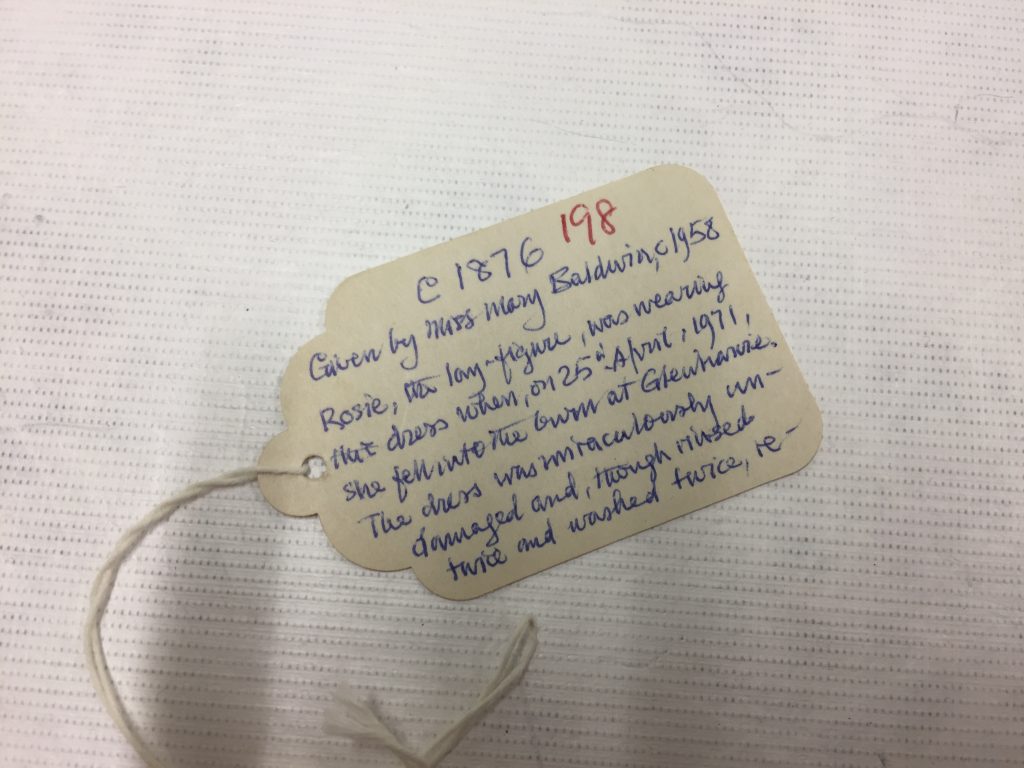 “Given by Mrs Mary Baldwin, c1958. Rosie, the lay-figure, was wearing this dress when on 25th April 1971, she fell into the burn at Glenharvie. The dress was miraculously undamaged and, though rinsed twice and washed twice, re-tained most of its pale pink colour, the stiff dressing in the material and remained strong and untorn. But the dye from the ribbon had run so the whole dress was given to Mrs Finch to press and remove the dye stains. It was returned in its present condition in October, 1972.”

These untold stories are what make working with this fantastic collection an absolute joy. From the transcript, we learn that Charles Stewart’s beloved mannequin Rosie was wearing this dress when on 25 April 1971 she fell into a burn. Stewart acquired Rosie, a life size mannequin with articulated joints which enabled her to take almost any pose, in 1954. Stewart credits Rosie and her benevolent and commanding presence for making him take his collection more seriously. 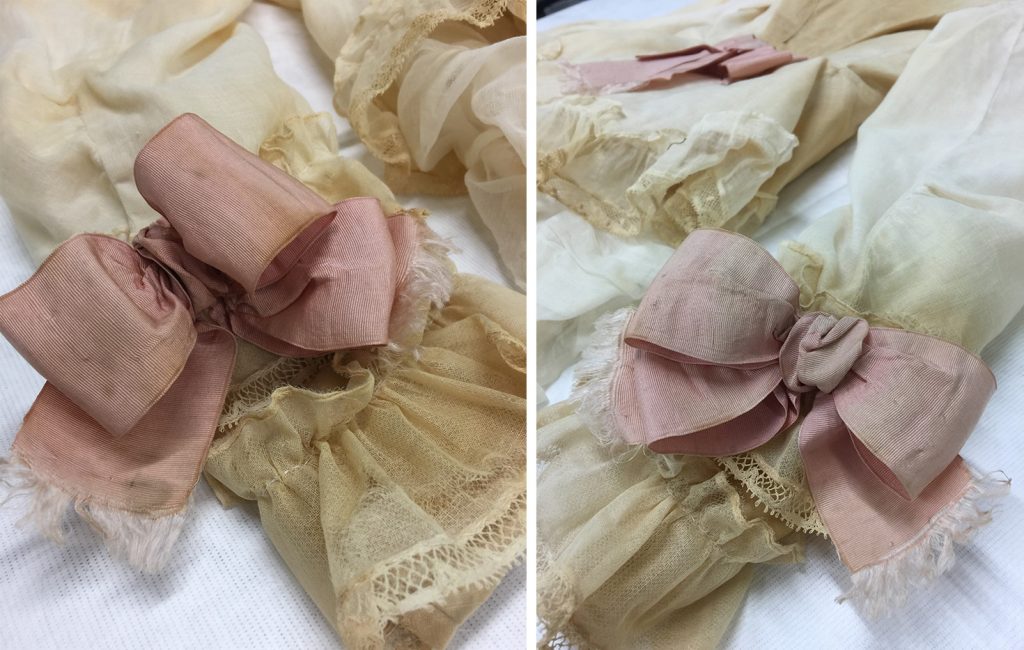 When examining the garment, you can see the effects of the aforementioned event. Stewart states that the dress was rinsed and washed twice, although this was done before the garment was donated to the museum and became an object, as nowadays this is a process we would almost never do. The dress was given to Mrs Karen Finch, a famed and pioneering conservator of the time, for the removal of the dyes which had run from the pink ribbons. On very close inspection you can see that Mrs Finch did a great job removing the dyes, and fixing and darning parts of the bodice and skirt. Stewart wrote on his label that the dress was returned in its present condition in October 1972, just five years before he donated his entire collection to National Museums Scotland.

Who can say if the discolouration of the dress was the result of Rosie falling into the burn or if it was perhaps a later consequence due to storage issues? Before the collection entered the Museum, Stewart had his housekeeper launder and pack his collections in plastic bags, which we know now to be not the best solution for storing fashion and textiles. 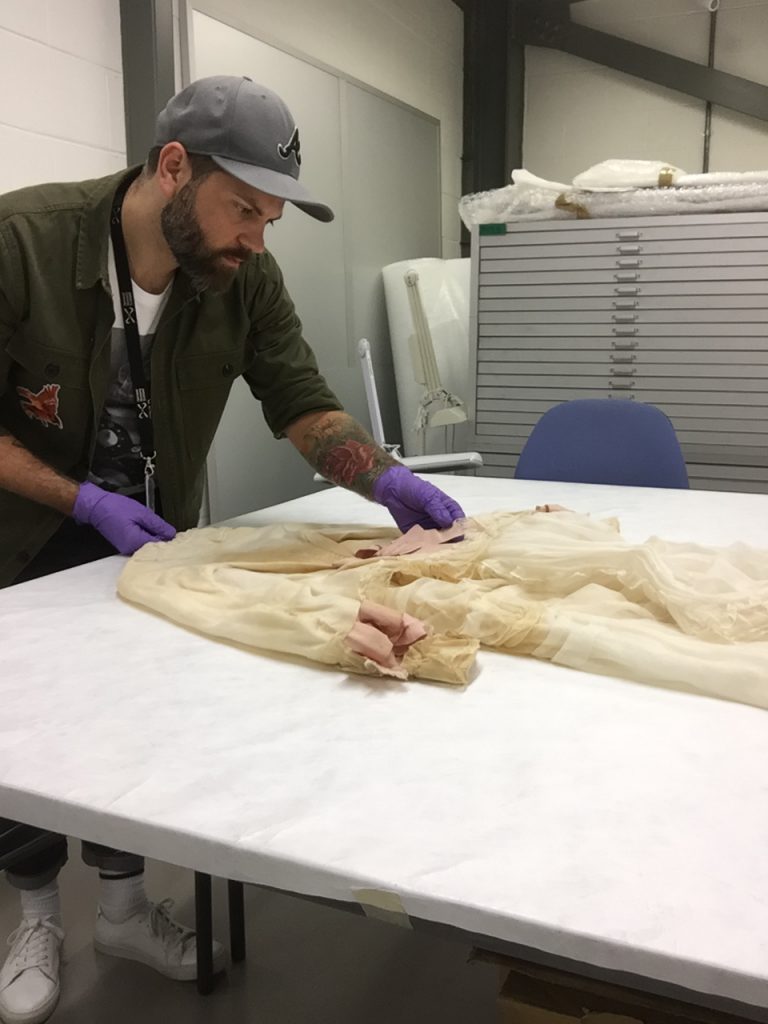 After inspecting the garment, I completed my inventory entry and hung the dress back in the store on its custom-made padded hanger and Tyvek bag. Through taking inventory and improving the storage of objects where necessary, stories were revealed that would not normally be included within the galleries and displays of the Museum, adding another dimension to the objects and offering an insight into the mind of the collector and his passion for the preservation of his collection.

Another aspect of this project I enjoyed was the retrospective documentation of the collection where I had the chance to carry out research and cross reference the original handwritten rough registers by dress historians Naomi Tarrant and Janet Arnold. This, coupled with Stewart’s original handwritten labels, added another level of interpretation to what is already a fascinating slice of fashion and textile history.

Items from the Jean Muir and Charles Stewart collections can be seen on display in the new Fashion and Style gallery at National Museums Scotland, whilst other pieces can be seen by appointment.