The ‘Battle Abbey Sword’ was made for the Abbot of Battle Abbey around 1417 -1434 and is a splendid and unique medieval war sword. It was acquired in the 1800s by the Meyrick Collection and donated to National Museums Scotland in the early 20th century.

I have been commissioned by English Heritage to make a replica of this fascinating sword to be put on permanent display in Battle Abbey, and so have looked closely at the piece, photographing and measuring it at the National Museums Collection Centre in Edinburgh. The blade has a (unknown) makers mark and is without a doubt a strong blade made for war, not just for show; it has the patina of a well looked after but ancient blade. The guard and pommel are made in iron and covered in silver plates, which have then been engraved and gilded, to create components with a unique level of decoration for a medieval sword, making this a very important piece. 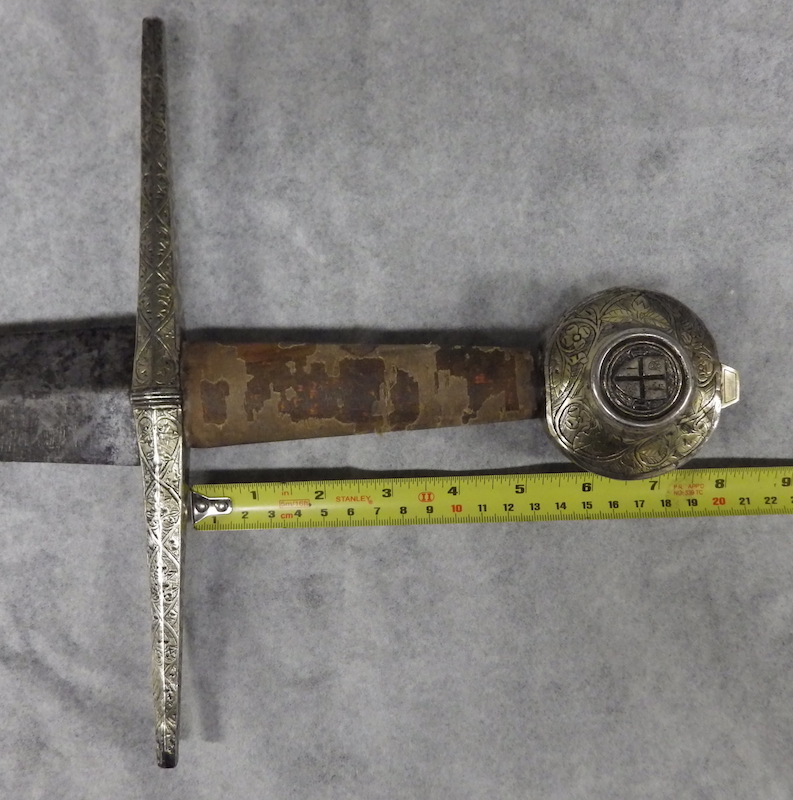 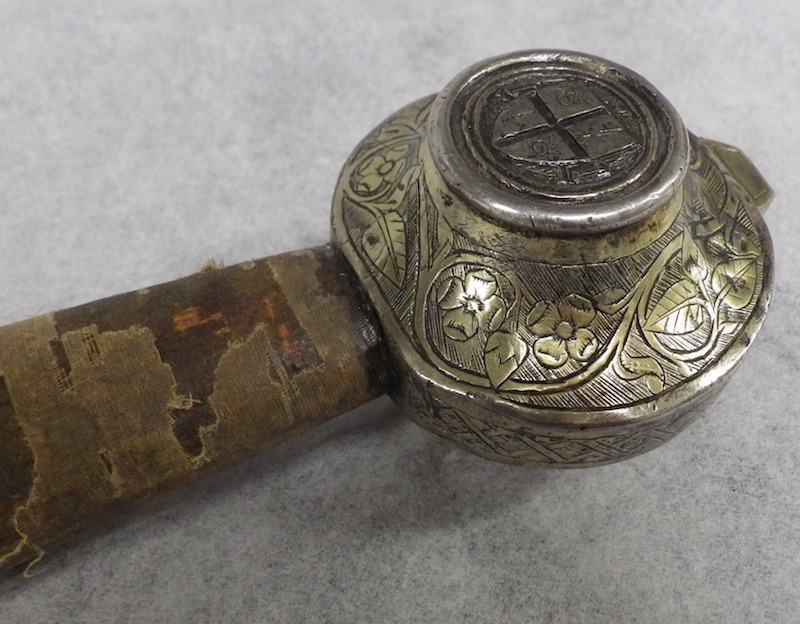 My first impression of the sword was its large size and weight, and my initial thoughts were that all is not as it seems… Of course, looking back 600 years it is often hard to know exactly what has happened, but it appears that the sword grip or the blade or both have been shortened by a few centimetres, which in terms of how a sword feels and handles can make a massive difference. This may seem like vandalism now, but in fact may have happened during the ‘working life’ of the sword, or possibly to repair damage or alter its appearance in the display-hungry Victorian era, when everything medieval was hung on a wall.

This sword was examined for a magazine 150 years ago and it was noted then that, at the time of writing, the grip had been recently added. We therefore know that this is a later addition, and that then it was an olive green colour, perhaps following what was originally fitted.

It would have been a great pleasure to make and engrave the guard and pommel as it was originally done – this is one of the pleasures of my job, walking in the footsteps of previous craftspeople. But these pieces were fire gilded with mercury and this I cannot safely (or legally) do, and so these pieces will be made in a different way. The guard and pommel will be carved in jewellers’ wax and investment cast in bronze and then gold plated.

When the castings came back from the foundry, they were fettled to make them fit the sword perfectly. The finish was excellent and required very little touching up, just a little filing and engraving the odd line that was near the filling sprues.  I gave them a light polish, but not enough to bring them up like a mirror and then sent them off for gold plating.

Once they were back, it was a very simple job to assemble the whole sword as everything had already been prepared. 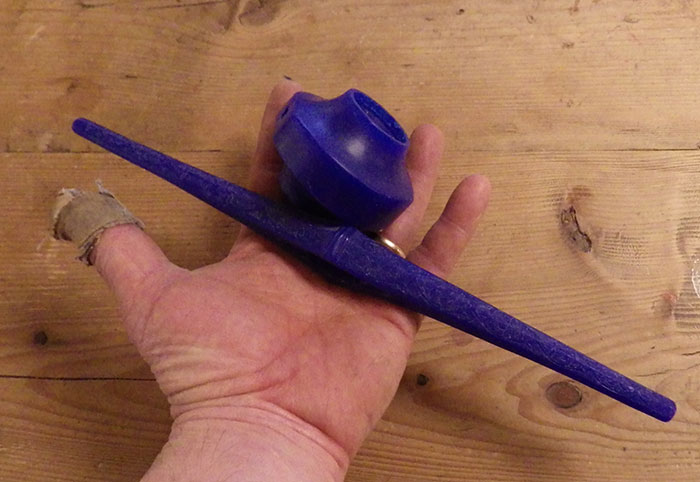 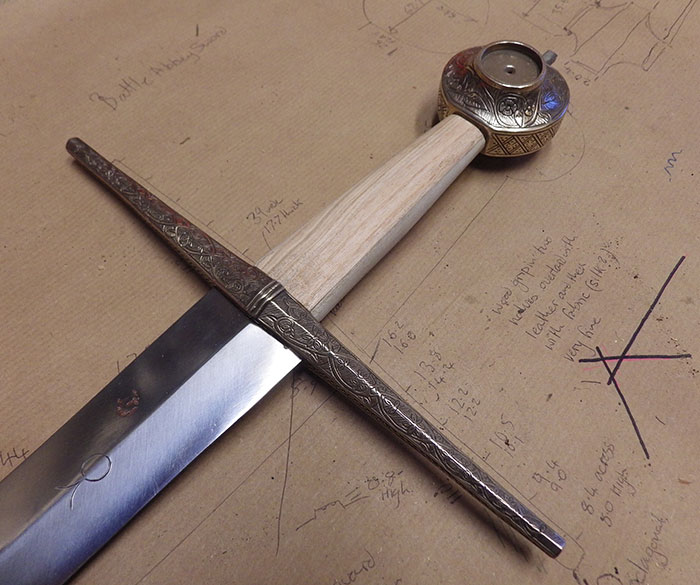 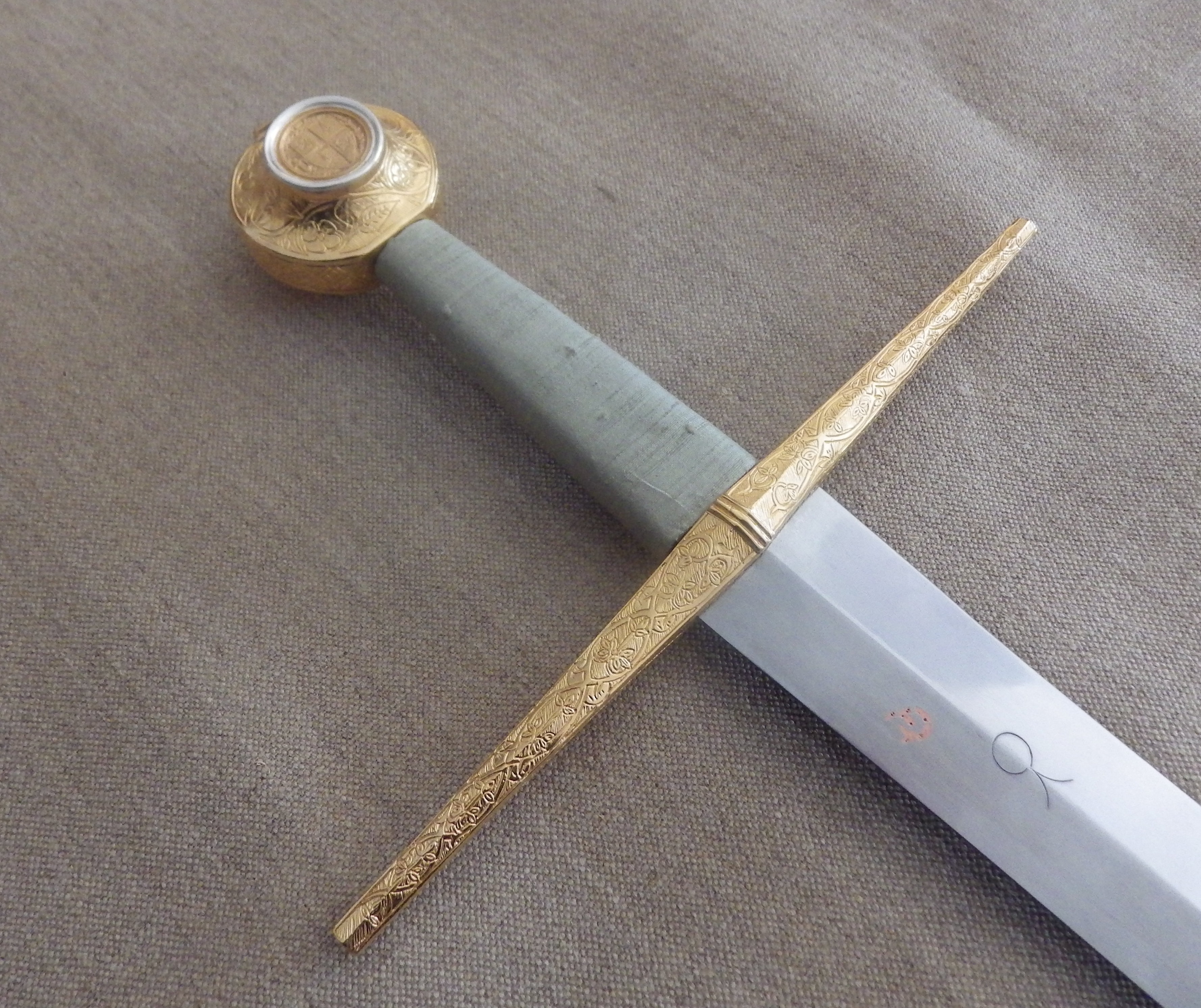 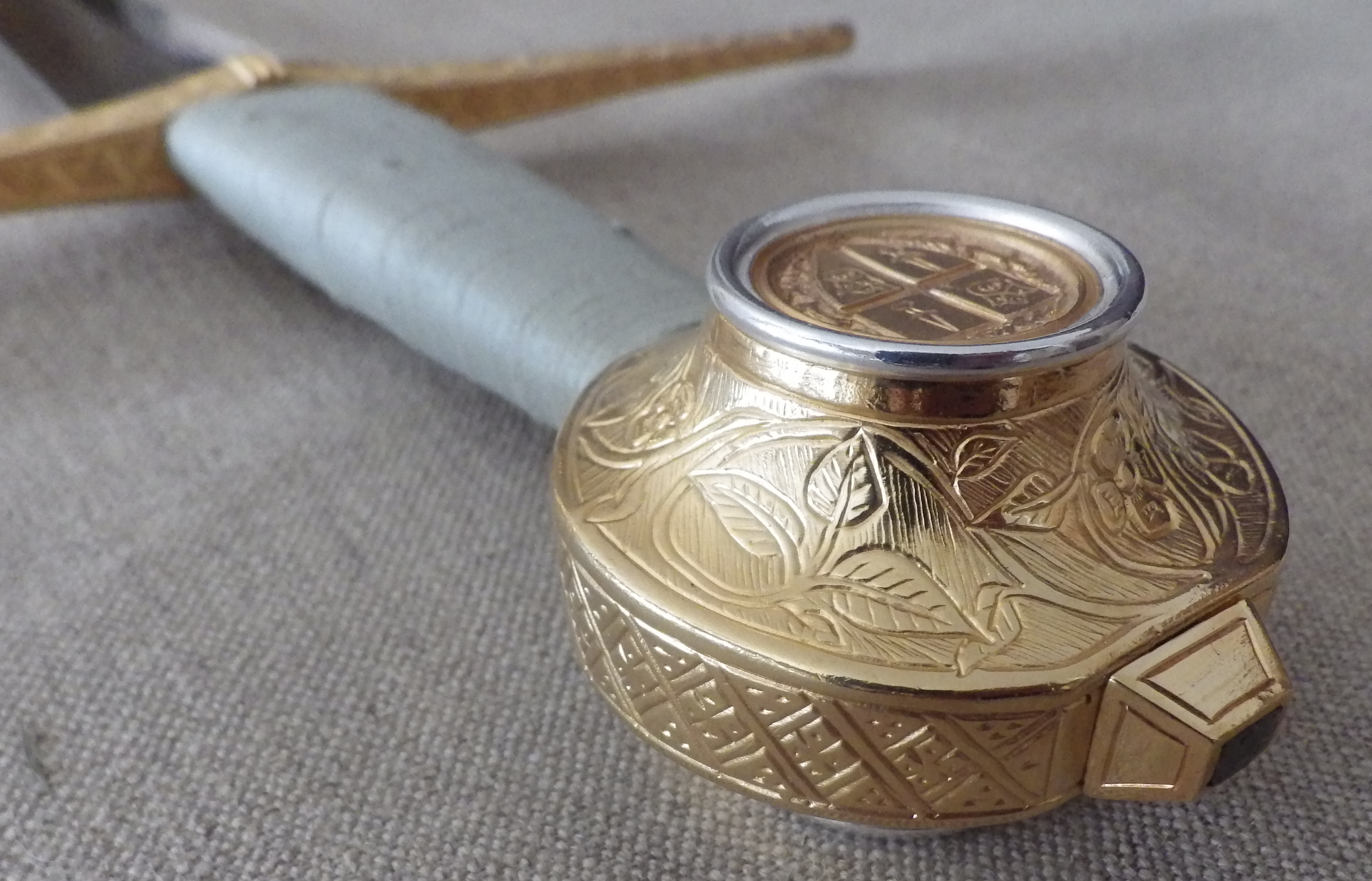 I would just like to thank English Heritage for asking me to make a replica of such a fascinating and stunning sword.

The sword can be seen in a new exhibition on monastic life at Battle Abbey, opening to the public on Saturday 1 April. The exhibition combines recreated objects, such as Abbot Thomas Ludlow’s sword, with archaeological finds that illustrate everyday life for the monks in the Benedictine Abbey. Find out more at the English Heritage website.

There is a discussion about this sword from contemporary makers, scholars and interested individuals here.

A 19th century discussion of this sword can be found in Proceedings of the Society of Antiquaries of Scotland, Ninety-Fourth Session, 1873-74, Vol. X-Part II.