The Pacific is a vast and varied region, with a great diversity of cultures and languages. New Guinea is just one, and the largest, of over 25,000 islands in the Pacific Ocean. Papua New Guinea is the most linguistically diverse country in the world, with 852 recorded different languages! That is 12% of the total global languages, in an area smaller than six Scotlands.

At the start of my museum career over a decade ago, I still remember being awed by the great creativity, diversity and spiritual power of the ethnographic objects on display in the newly opened Wellcome Trust Gallery of Living and Dying at the British Museum. One particular object stood out for me, and accompanied me in postcard form around various homes and places of employment over the following years: a spirit or ancestor board from the Gulf of Papua.

The ancestor figure displays what I see as a benevolent smiling face. What appears to be a second, somewhat less friendly, toothed face on his abdomen actually represents a decorative waist-belt, navel and nipples. I was instinctively attracted to the bold imagery and solid physicality of the figure, which is so different to the transient and intangible perceptions of our own European ghostly ancestors, or folkloric spirits of nature and place.

Some years later, I have the great privilege of working closely with the Oceanic, African, American collections at National Museums Scotland. I am again drawn to the objects from Papua New Guinea, for their distinctive designs incorporating a strong patterning of spirals, chevrons, and zigzags. Appealing human and animal features are carved and sharply delineated, often infilled with white lime-powder or powdered shells, charcoal, red ochre, and other natural pigments. 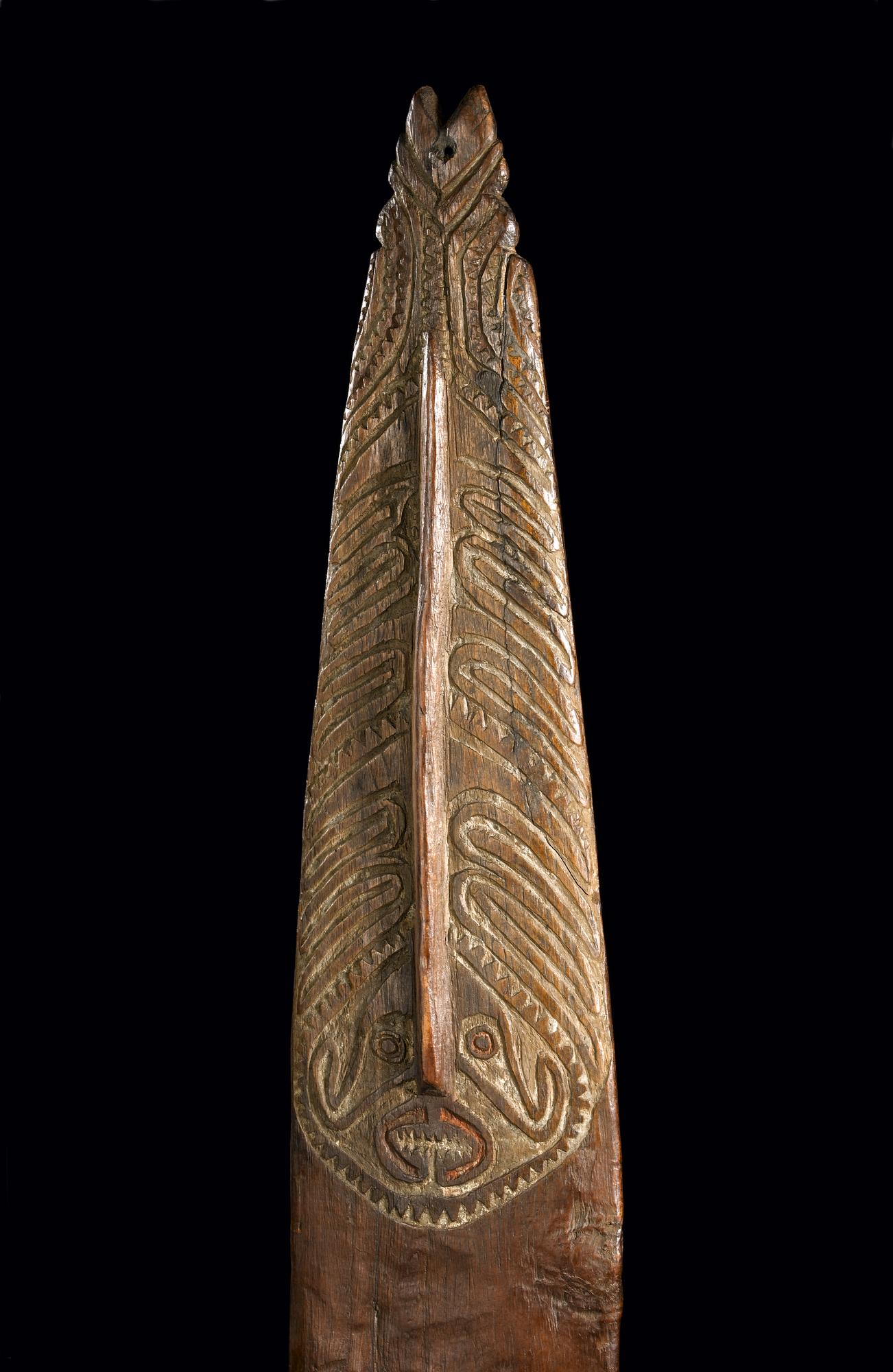 These designs appear on a wide range of both domestic and ritual objects, from lime-powder scoops to fishing floats. On masks and masquerade outfits, as on the spirit boards, eyes and mouths are often particularly large and prominent, frequently accompanied by hooked noses, sharp pointed teeth, tassels, fringes, feathers, human hair and bark cloth streamers.

National Museums Scotland also displays a spirit board in the Facing the Sea gallery, and has a number of similar objects in storage.

Called a spirit board, ancestor tablet or kwoi, it comes from the Purari Delta area of Papua New Guinea. Like many spirit boards, it is slightly curved as it was probably made from an old canoe, imbued with its previous usage by the community who owned it. The boards were kept safely in special long-houses accessible only to men, as part of a family shrine revering the spirits and ancestors. This would ensure health, fertility, wealth and success in hunting, harvesting, warfare or trade.

Like the British Museum example, ours has a small, distinct head at the top, but also a definite larger face in the place of the original figure’s abdomen. The main body of the board is bordered by a chevron design which references similarly decorated bark-cloth bands worn by men whilst dancing. The thinner line of black dentate, or zig-zag teeth, represent strings of dogs’ teeth worn during festivals, as well as being valuable objects for exchange and trade.

Our spirit board has an interesting provenance. It came as part of a group of over 270 world cultures artefacts received as gifts between 1949 and 1953 from the massively diverse collections of the Wellcome Historical Medical Museum. The pharmacist and entrepreneur Henry Wellcome amassed an enormous collection of anthropological material relating to physical and spiritual health and well-being, which was subsequently distributed to collections around the world.

Previously it was owned by André Breton, founder and writer of the Surrealist Manifesto in 1924, one of many European artists who were attracted to and inspired by Pacific art. The Surrealists were particularly interested in ethnographic art from the Pacific and indigenous North America. They believed such objects contained ‘primitive power’, creating emotional and imaginative responses in the viewer that tapped into the subconscious beneath the veneer of western civilization.

Breton, together with his partner, the poet and fellow Surrealist Paul Eluard, amassed a large collection of Pacific and North American art. They were forced to sell most of it at auction in 1931 during a financial crisis. This was when Henry Wellcome bought it in Paris, at the Hotel Drouot, for £6.12.0.

National Museums Scotland owns a number of other spirit boards, shields, and carved figures from the Gulf of Papua, some with similar decorative motifs and devices. They are cared for in our specialised collections stores. These may now be a great distance in miles, years and ideology from their originating communities, but I hope the spirits are happy in their secular longhouse, respectfully protected and kept together with other sacred objects in the best environment possible.