I won’t lie, I am rubbish at playing computer games. See our mini Mammoths of the Ice Age game? I commissioned that, yet I’ve never reached the end. Never. Have you tried it? Try it now – I bet you get to the end.

So here I am, Scotland’s worst gamer, and I’m wanting to make a game to tie in with our Monkey Business exhibition. The idea is to create something simple, fun and addictive, that will convey a key message of the exhibition and appeal particularly to school children. What to do? Well the answer’s obvious isn’t it? Get school children to design it.

So together with colleagues in the Learning and Programmes department, we decided to run a Scotland-wide competition for school classes, clubs and youth groups to send us their ideas for primate-inspired games. Scotland is renowned as a powerhouse for game design, producing titles that have sold millions of copies around the world; it was time for the next generation of designers to stand up and be counted.

The first stage was to get a game developer on board: step up Biome Collective, who also made our awesome Dolly and the Atom Smasher game, working with pupils from Craigie High School in Dundee. Mal and Tom from Biome helped me put together a ‘brief’ for the competition, to give the kids taking part the best possible chance of coming up with a game that would really work – and would be possible to build on our museum budget.

Games, they explained, are made from stories about characters in interesting worlds.

What is the story for your game? we asked. Who are the characters and what do they look like? Where is the game set? What is the central protagonist trying to do in the game and what is stopping them?

We included a fact pack, created with the assistance of Dr Andrew Kitchener, Principal Curator of Vertebrates and the man behind the Monkey Business exhibition, to give entrants some ideas about different kind of primates (there are over 600 species!) and what they like doing.

We also gave the children some examples of games to have a look at, so they could think about the stories behind them, including Frogger, QWOP, Velo Kitty and Matchy Matchy. (Yes, I have played them all and yes, I was rubbish.)

We launched the competition and promoted it to teachers and youth leaders through the website and our social media (including some targeted paid advertising on Facebook), then waited for the entries to start coming in. The prize was tempting –seeing your game come alive on the museum website, plus a VIP visit to the Monkey Business exhibition. Yet coming up with a game concept is a big ask – would anyone take up the challenge?

Fortunately for us, Scotland’s school children are a wildly creative bunch. Our problem swiftly turned from ‘what if no-one enters?’ to ‘how can we ever choose between these ideas?’ Below are some of the entries we were sent – we could have made games from them all.

The idea we chose, however, combined a clear message about primate diversity with charming illustrations and a playful mechanic that Biome could envisage working really well in a simple game. The winning team? Team Monkey Expo, aka class P4W from Trinity Primary School in Edinburgh. 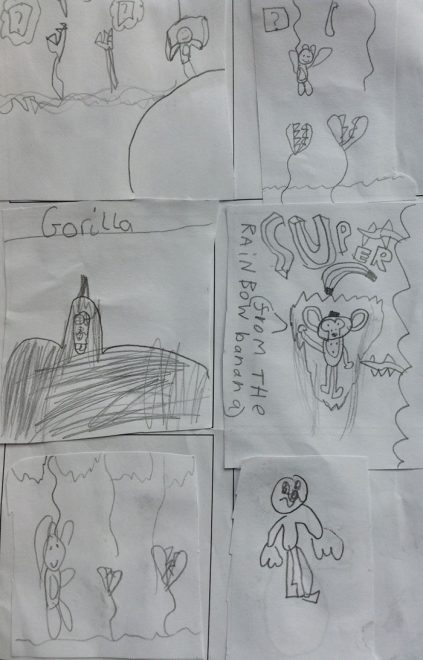 We were keen for P4W to be involved in the game development process – and fortunately they were keen too. Their first task was to critique Biome’s recreation of their characters. Their conclusion? They liked them, but Cutey the Slow Loris wasn’t cute enough!

The next step was to try out a basic version of the game. Now titled Monkey Business Lunch, it involved picking the correct fruit to feed to each of the four primates. Keep them waiting too long and they become grumpy – and you lose a life. In the New Year, the class tested a more developed version, featuring pesky Venus Fly Traps which snatch the food away, and the dramatic entrance of Big G, who eats everything!

A few more tweaks and the game was ready for release on the National Museums Scotland website, a launch cunningly timed to coincide with P4W’s VIP visit to Monkey Business.

The class were very enthusiastic about the exhibition, and thoroughly enjoyed meeting all the different primates (including the stars of their game) and trying out all the interactives. Curator Zena Timmons was on hand to answer their questions – most of which revolved around the grislier aspects of taxidermy. Have you ever wondered what becomes of the insides of a stuffed specimen…?!

After the exhibition visit it was lunch time – and, of course, time to play Monkey Business Lunch. It was fantastic to see the pupils so excited about their game – and, as it can be played on a white board as well as a PC, phone or tablet, everyone was able to try it out on the big screen. Mal, Tom and Albert from Biome answered the class’s questions about games and coding and, at the end of the session, when the kids were asked if they’d like to be game developers when they grew up, lots of hands shot up.

Huge thanks to Biome, the staff and pupils at Trinity Primary School and everyone else who entered the competition for making it such a special project. Not only have we gained a fun, fresh game for the website that we know appeals to its target audience (and, cough, quite a lot of grown-ups), but we’ve also been able to enthuse school children around Scotland with an interest in game design – and, of course, primates!

You can play the game at www.nms.ac.uk/monkeybusinesslunch on your computer, tablet or phone. My highest score so far is over 4,000 – so come on, you know you can do better than me…