Would you sequence your own genes?  Do you want to know what might lie behind your traits, or is there something sinister in knowing too much?  This was the question we posed to an intrepid group of Higher and Advanced Higher biology pupils at Big Ideas Day, in collaboration with the University of Edinburgh.

Why now? The Human Genome Project was completed in 2003.  It took 15 years and cost around $3 billion to sequence one genome, the complete genetic information in a person. Now, it costs under $1000 and can be done in days, with home kits testing some key genes available for around £100. Researchers in Edinburgh are at the forefront of this technology and are keen to consider the ethical issues surrounding it. Who better to ask than the scientists of tomorrow?

The day began with a phone-based vote; overall, pupils began the day in favour of finding out.

After an introduction by Professors David Porteous and Sarah Cunningham-Burley, representing genetics and social science, we dispersed around the Museum for breakout sessions.

Groups explored how genetics might influence personality and perception with the film Genetic Me by Danish journalist Lone Frank as a jumping off point, while Beltane Fellow Dr Gill Haddow used the 1997 movie Gattaca as inspiration for discussing potential legal issues.

We also looked at how to communicate your viewpoint in a digital age with the expertise of digital marketing executive Nick Wilkie from creative agency Frame and my Wellcome Trust-funded curatorial counterpart, Sophie Goggins. 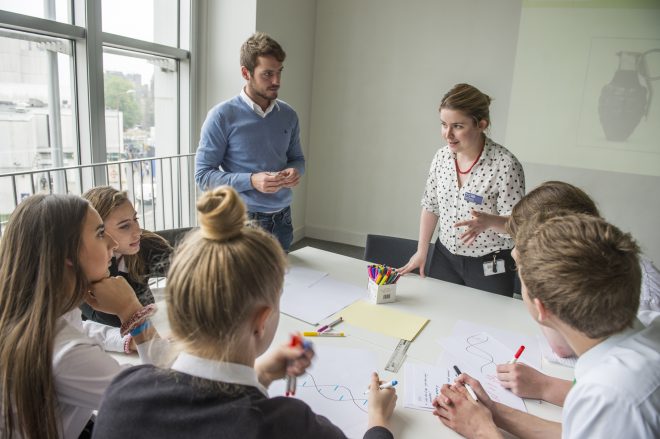 Attendees also explored our new Science and Technology galleries and had an opportunity to meet Gen, our blobby online game, as well as familiar friends like Dolly the sheep.

Finally, we reassembled in the Auditorium for another vote. The result? More uncertainty than before which, as Science Engagement Officer, I am delighted with; I would much rather sow the seeds of curiosity and critical thinking than tell anyone what to think.

Would I have my genome sequenced? I genuinely don’t know!