We were recently moving our chemical and related collections into new storage at the National Museums Collection Centre and updating the locations of all the specimens – one of the many behind the scenes, day to day activities which go on in a museum. Most of the time, matching up the numbers clearly marked on the specimens with our records was a straightforward task, but some needed detective work.

This large growth of crystals in particular caught my eye as needing some thought. There was a century-old display label next to it, which said “Salt, crystallised. Obtained by evaporation of sea water in the salt pans at Grand Turk, West Indies.” Yet the specimen definitely didn’t look like sea salt to me. So what was it? It did have a paper label stuck to the specimen, which had once had the number on it, but it too had become coloured blue and wasn’t exactly legible, not even under ultraviolet light, which helps us read some faded labels.

I spent a while on our computerised database trying to see if our chemical collections contained any blue crystals – but unfortunately the colour isn’t often noted in our older records, just the chemical name. What chemicals are that navy blue colour?

My first thought was Prussian blue, used as a pigment in art and in photography, the blue of blueprints. We also have dark blues in indigo and some of the artificial pigments, including Nicholson’s blue. Unfortunately none of them seem to form crystals like these.

It was time to call in some help. Peter Davidson, our Senior Curator of Mineralogy, kindly agreed to run this through our X-ray diffraction apparatus. This is a powerful tool, developed by William and Lawrence Bragg, who were awarded the 1915 Nobel Prize, to probe inside a crystal and investigate the arrangement of atoms within it. In looking closely at the crystal to find a tiny loose piece for analysis, I noticed that the blue colour was only a surface coating, and it seemed to be amber coloured inside. Curiouser and curiouser. 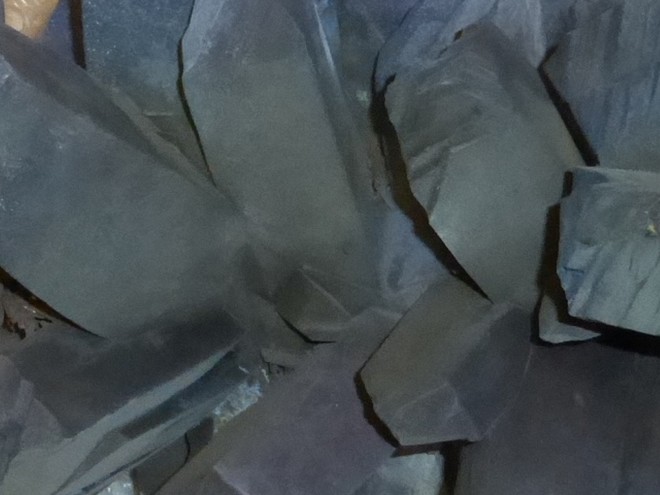 So finally I had the great satisfaction of identifying this crystal as ‘red’ against the evidence of our eyes. Just a little part of what curators do all day.

This specimen is not planned for display at the moment but if you want to find out about X-ray diffraction and crystallography come and visit our new Enquire gallery opening in summer 2016.