I went on an orange bus with my friends Jessica and Alexander and it looked like people were in it and it had a big huge mammoth on the outside. We wore some special mammoth outfits which had round heads and a suit which was quite boiling and hairy.

A lady from the Edinburgh Evening News came and took pictures of us and there were pictures of us walking across the road outside the museum and lots of us playing inside and outside the bus. We went on the front page of the newspaper and inside it. 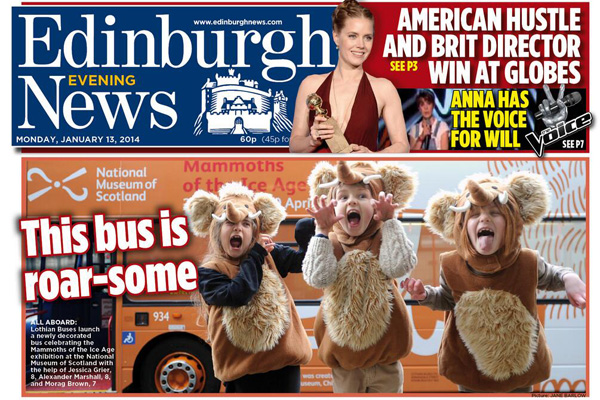 The next week, we went to the Mammoths of the Ice Age exhibition to meet some people from the newspapers and television to have some more pictures and video taken.

There were lots of pictures taken of me and my friends in the Mammoths exhibition and they appeared in the newspapers the next day all over Scotland and United Kingdom.

My favourite picture was the one of me and the Sabre tooth cat having a staring competition.  Me and my friend Jessica were on the television news wearing our mammoth outfits talking to a lady and Alexander was really busy playing with games around the exhibition. Jessica’s mum also went on the television news but my mummy didn’t want to speak to the people from the television.

The exhibition is really, really good and the best bits are the bones and plastic people and the big mammoth was almost touching the roof and was as big as a bus! I liked the mammoth head fighting game with tusks and I was playing this with Jessica and the tusks got stuck together. Alexander also went ice skating in his hot and hairy mammoth outfit too!

I really liked the exhibition and when my friends Philip and Kyle from Boston in America came to Scotland on holiday I took them to the Mammoths exhibition. I would like to go again before it ends.