In two parts Captain Tony Yule tells us about his career as a Concorde pilot with British Airways.  In part 1 he describes the Concorde pilot training programme he undertook and in part 2 he reveals tales of his adventures piloting Concorde. You can see and experience Concorde for yourself at National Museum of Flight, East Fortune.

USA, Caribbean and beyond

Once I had passed my Concorde training, I began six years as second in command, flying primarily to the USA and back with Barbados included in the winter schedules. During my time, I completed just over 2500 hours with most of those hours being to New York and back.

I think I went to New York twice a week for six years. It was my favourite destination and I even wrote a “walking tour” of the city, for newcomers to the fleet. It was that tour that got me on BBC Radio 4’s “Going Places” in 1989, with Molly Price-Owen and Clive Jacobs, to celebrate the 20th anniversary of Concorde’s first flight.

The Concorde operation, in my period on the fleet, 1987-1993, was two flights a day to JFK, three flights a week to IAD/MIA (Washington Dulles and Miami), one flight a week to BGI (Barbados) from mid-December to just after Easter. There were many charter flights to a wide variety of destinations around the world.

By the time Concorde had finished, she had made the equivalent of 250 round trips to the moon, flown to more than 250 destinations, of which 80 plus were within the USA.

Flying Concorde was great fun. It was a very stable aeroplane and for half of my time on the fleet I never used the autopilot. It was a fabulous experience to handle such a great flying machine.

Supersonic flying was quite unique at first. Concorde flew two and a half times faster than subsonic aeroplanes and it took a few months of flying to become really comfortable with the operation. You had to be “on the ball” throughout the short flight. It was not an aeroplane where you wandered into the cabin to chat to the passengers. They in fact, came to visit us. 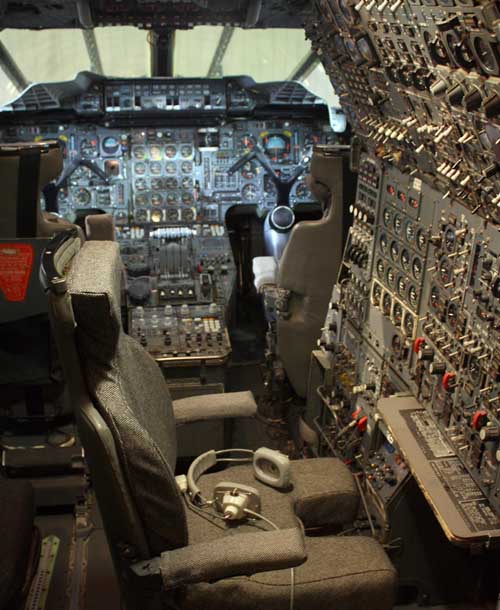 I met a few interesting people, Brigitte Neilson, Steven Spielberg, Jackie Stewart and Nigel Hawthorne, these last three always came straight into the flight deck for the take off, then returned for the landing. Incidentally, Steven Spielberg never used his real name.  It reminded me of Julia Roberts in the film ‘Notting Hill’.

At the latitude we flew, Concorde travelled two and half times faster than the setting sun. One of the most memorable things that occurred to every Concorde pilot was the first time (in the early Autumn), you took the late service, BA003. If you departed at 7pm, now darkness and by mid Atlantic, heading West of course, you experienced a sun rise for the second time that day, duly landing in daylight at JFK at 6pm local time. You never forget your first time – ever!

Over the years, other than the scheduled services to New York, Washington Dulles, Miami and Barbados, I flew charter flights to Lexington Kentucky, London Ontario, Seattle, St John’s Newfoundland, Santa Maria in the Azores, Cairo and Luxor – on ‘Red Nose Day’, while I talked with Simon Bates and the listeners on Radio One about the operation we were doing.

One of the best trips I made was to Rovaniemi in Lapland in December, where the passengers went to see Father Christmas. On two occasions I spent Christmas there in the hotel. On Christmas morning, all the children from the town plus those returning on Concorde came to the hotel. The manager of the hotel led the children to a wood for them to select the tree that they would decorate in the hotel before lunch.

The crews always became involved in a sort of pantomime after lunch for all these children. I ended up on one occasion, as the back end of a cow while at the front end was a beautiful stewardess. I was given a yellow rubber glove to use for ‘udders’!

I feel very privileged to have had a career as an aviator spanning 46 years, including being part of history in flying Concorde.  Lastly, it was my privilege to have introduced my replacement on the fleet, “The Crimper”, Barbara Harmer, who died two years ago on on 20 February. You can see my tribute to her on my page at, www.facebook.com/concordeheritage