As a child, I remember school trips to the awe-inspiring National Museum of Scotland; where as impressionable, young boys and girls we’d stand agape surrounded by the exotic exhibits from throughout the ages. With its labyrinth of corridors and endless rooms of undiscovered beauty, history, art and science; it was like entering another world. Little did I think that many years later, I’d be lucky enough to host a spectacular and unique event within the very same place.

Now, with its state-of-the-art refurbishment and modern development, the museum is even more special; and counts as a must-see when visiting Scotland. Thanks to RBS Museum Lates you can now investigate this gorgeous space with interactive elements and a sublime sound-track of contemporary, Scottish sounds.

On 19th October, I’ll be introducing acts onstage as your host for the evening, whilst spinning the platters that matter in between. Having broadcast for over 13 years on BBC Radio 1, BBC Radio Scotland and 6 Music, as well as my role as BBC TV presenter, DJ and journalist (including years of writing a column for ‘The List Magazine’); I’ve made a point of championing, supporting and shining a spotlight on the cream of Scotland’s cutting-edge talent.

I’m glad to see the RBS Museum Lates are on exactly the same page, and booking the kind of artists I have on my weekly BBC radio shows. I attended the last event when Django Django headlined to a capacity audience in fancy dress. In these wondrous surroundings, and with an enthusiastic and respectful crowd, it truly was a sight to behold with a magical atmosphere. I’m delighted to be involved this time, and will do my best to tweet throughout the night www.twitter.com/vicgalloway

On the 19th, electronic wunderkind Miaoux Miaoux, aka Julian Corrie, will be showcasing tracks from his outstanding ‘Light of the North’ LP on Chemikal Underground Records and demonstrating how effortlessly he blends uber-melodic songwriting and up-to-the-minute electronic production, to make sparkling, new pop music. He will be ably supported by one half of another superb electronic act from Scotland, Conquering Animal Sound. As ANAKANAK, Anneke Kampman will no doubt welcome us into her strange but beguiling world of loops, beats, pops and bleeps. If you needed more, then the Silk Cut DJ’s will be opening the show with their mangled take on house and experimental, electronic sounds. 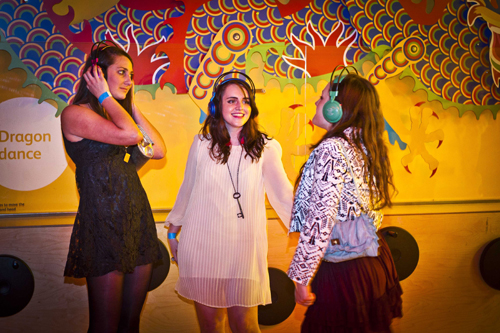 If you’ve ever wanted to explore a museum at night, this is the time and place to do it. As well as the LIVE acts, you’ll be able to visit the Imagine Gallery, a chill out zone, a film screening and so much more. With so many different ways to enjoy yourself, and in an age when we are bombarded with pop-culture from every angle, it’s refreshing to be part of something that genuinely feels unique and exciting. So don a mask of your choosing (or make one of your own), grab a drink, have a wander around and pay a visit to the dance floor on what promises to be another phenomenal night at the museum. See you there!