We caught up with Ritchie Young, who has recently joined National Museum of Rural Life, about the spring activity and new arrivals at Wester Kittochside farm.  Ritchie is responsible for the day-to-day management of the farm at Wester Kittochside, caring for the rare breeds livestock and crop cultivation as it was in the 1950s.

How many calves have been born so far this season and what are their names?

Six calves been born so far, Candy’s Elegance the girl and Harry, Henry, James, Boab and Tom Launce the boys. The purebred calves get names from their mother, Candy, a supreme Ayrshire champion – Candy’s Elegance’s mother. Maggie MacDougall, our Stockperson, just picks the rest of the names. Tom Launce was named after a couple of wee boys who were in when the calf was born, James is named after my wee boy and Boab was named after my James (my son) saw the calf and said ‘Boab, Boab’ so it came from that. 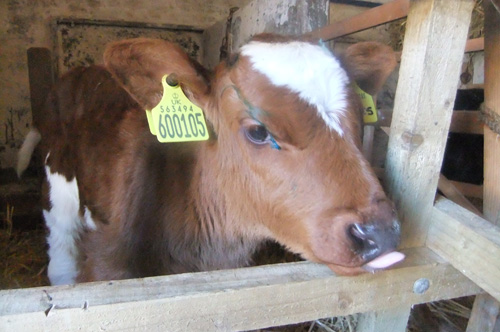 How do you know when a calf is on the way?

When the cow is calving, the udder will fill up with milk a day or two before the calf is due. When she goes into labour she will show signs of discomfort, getting up and lying down, swishing her tail, groaning and generally unsettled. When the onset of labour comes on she will start pressing (pushing).

Once they are in labour you just basically observe them. If they have been active for a while you may have to check the orientation of the calf to make sure that it is the right way around. If it’s not, it won’t come out naturally and then we will have to intervene. If there is a major problem, we call the vet in. For instance, the first cow that calved had hypocalcaemia (lack of calcium) so we had to get the vet in then. Giving birth involves a lot of effort, and the cow produces a lot of milk, which can cause them to have a dip in their calcium levels.

We check on them regularly and look out for any signs of distress and give assistance to get the calf out – basically pull the calf out. Once the calf is born you give it a rub to clear the airways and make sure it’s breathing. If the calf is okay you dip its belly button and umbilical cord in iodine which dries it up and seals off any infection. The calves get their ear tags within the first 24 hours and Maggie or I make sure that they get enough colostrum (vitamins) to help them fight off infection and provide sufficient antibodies. They get that in the first six hours to receive the maximum effect.

The calves will be kept inside the barn until April and then housed depending on the weather. They are fed on milk for eight to ten weeks and once they are off the milk they are released into a small paddock. Six cows are still waiting to have calves, one in the next few days, one within the next ten days and the rest are due to arrive in April.

What other new arrivals can we expect this spring?

We’ve scanned all the ewes and there are 135 lambs due. We also have six Aberdeen Angus cows due with calves at the beginning of May and expect to see some new Tamworth piglets by May as well.

What else do you do on the farm on a day to day basis?

A lot of my time is office based until now. Maggie is in control of stock planning, fertilising and lambing so will be busy. There are lot of projects on the go and we are currently getting a new building for general storage so we can buy in bedding and save costs on cattle feed by bulk storing. At the moment we buy it in small bags which use plastic so by buying in bulk we are using less plastic which is better for the environment, and for recycling.

What crops do you plant on the farm?

Oats, potatoes and wheat are the crops we mainly grow. We keep the animals out of the field to minimise crop damage and have a scarecrow to chase the birds away or just create a disturbance. I don’t see myself chasing birds down the fields however…

How have you found your first six months on the farm?

It’s been different, a steep learning curve and the curve has not ended yet. There’s a lot more to learn and think about as Farm Manager at National Museum of Rural Life than on a normal working farm.