How can contemporary collecting tell stories about shifting patterns of land ownership in Scotland, and the impact on communities, wildlife and landscape?

The way we use land, who owns it and how we relate to it are important questions across the world. Land ownership has been a contentious issue in Scotland for centuries. Today, it is estimated that around half of this country’s privately owned land is in the hands of fewer than 500 individuals. Recently, there have been major legal changes around land reform aimed at redistributing land, by putting it into the hands of local people.

So, how can objects tell us about the impact of land reform on Scottish life?

We’ve been collecting around two island community buyouts: Eigg in 1997 and Ulva in 2018. This summer, I visited these islands – both on the west coast of Scotland – to explore their very different but interlinked stories and make a film about the objects we’ve collected.

We stepped off the ferry from Mallaig and on to the Eigg pier on a gloriously sunny morning to meet Maggie Fyffe, one of the original members of the Isle of Eigg Trust. The Trust, formed by the late crofter Tom Forsyth, campaigned for many years to buy the island after it was put up for sale twice.

Another member of that group, writer and activist Alastair McIntosh, has donated a small collection of objects to the National Collections. At the centre of the group is a drum he made from rawhide and birch, painted with swirling colours. A soaring eagle is etched on the skin. The drum was played at meetings and ceilidhs around the campaign to buy the island, and at events connected to land reform in the years since that time. A glossy sales brochure for the island, which was marketed internationally as a luxury estate, together with a string bag gifted by a group from Papua Indonesia who visited Scotland to learn about land redistribution here, underline how these issues reach across the world.

Maggie still lives and works in Eigg. She showed us around, telling us about how the pier we were stood on and the shop and café a short walk away had been developed by the community in the early days.  Maggie told us about how, since the buyout, the population of Eigg has nearly doubled, reaching over 100 for the first time this year. We also met Sarah Boden, who grew up in Eigg but moved back after years living in London, to work the farm with her parents and raise her family. For Sarah, the way that community ownership shapes everyday life on the island and the focus on sustainability and green energy makes it a really special place to live.

What the Isle of Eigg Trust achieved helped pave the way for later community buyouts.

After twelve months of campaigning, the island of Ulva was transferred to the local community on the 21st of June 2018, just four days before we visited.

Like every person who visits Ulva, we summoned the ferry to pick us up from Mull by using the ferry signal board that has become iconic of the island. We are collecting this sign as an object that is symbolic of Ulva and represents the link to Mull and to the wider world. Ulva is an island with a fascinating history and stories that span the globe. 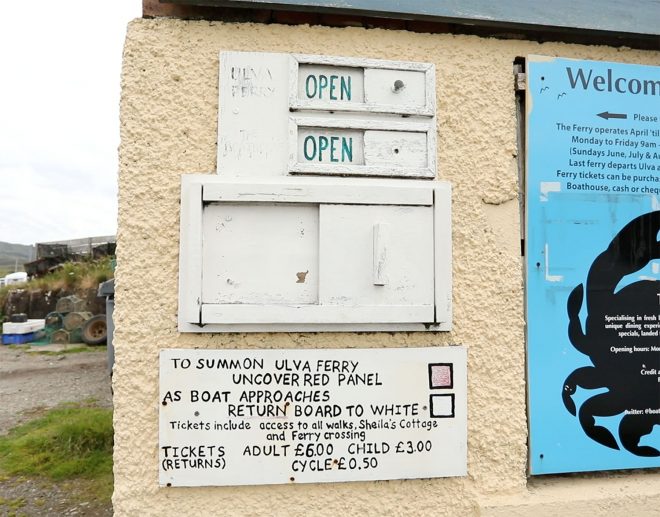 We spent the day with Rebecca Munro, who runs The Boathouse restaurant just next to the ferry. We met her husband Rhuri, who was brought up in Ulva, and their children. When the island was put up for sale without their knowledge, this family became central to efforts to buy it for the local community of Ulva and North West Mull.

Contemporary collecting enables us to link past and present, and to record the deeply personal stories and hidden meanings that people invest in objects. Alongside the sign, we’ve also collected the Munro’s doorknocker. This anchor-shaped knocker sits in the windowsill of their family home. It fell off a while back, and was set on the window sill. During a difficult time for the family after the island was put on the market, the Munros felt that the knocker became a symbol of dilapidation and uncertainty about the future. In the moment that ownership of the island transferred to the community, it shifted to become a symbol of plans for regeneration for the island.

Together, these objects represent the island of Ulva at a pivotal moment in its history, as it moved into the hands of the community. They mark the significance of the buyout for the people who call Ulva home and document shifting attitudes and policies around land reform more widely, and give us the opportunity to understand and record how objects are imbued with emotional resonance by their owners.

We’ll continue to collect objects from Ulva, to trace the impact of land reform on the people, wildlife and landscape of the island into the future.

Representing land reform as a changing area of politics and of Scottish life is challenging, with stories embedded in surprising objects. Across the world, questions around land distribution are tied up with issues around human rights, aspects of belonging and identity, and ultimately, are about who holds land, wealth and power. These two islands, as distinct geographical spaces, are a useful starting point for representing these vast and complex issues as they relate to Scotland.

You can find out more about the objects and here from the people involved in this film, part of our Collecting the Present series.