This is a well-travelled cabin trunk. 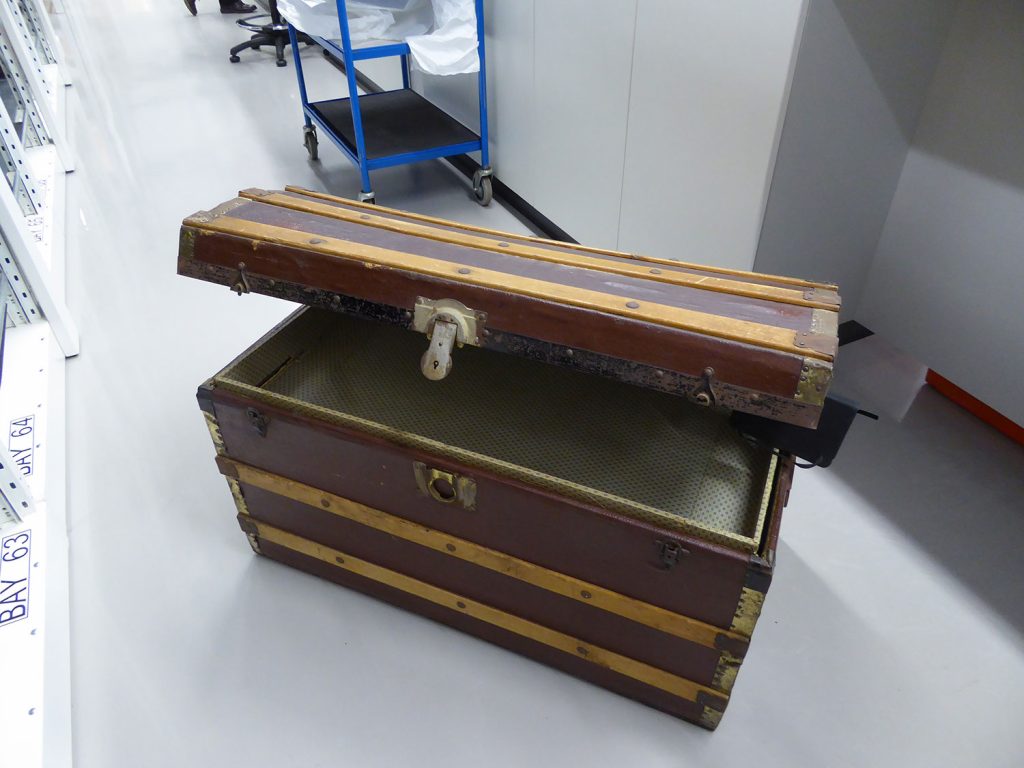 Its travels started almost 150 years ago in 1879, when, with three other trunks, it set sail for New Zealand with Mr Harris’ newly-married great-grandmother Jessie Mackenzie and her husband John Gallie. They had married on 2 June at Jessie’s home, Rhamore farm in Edderton, near Tain, Ross-shire. By 4 June they were embarking on the clipper ship ‘Nelson’, which set sail from the Clyde and arrived at Otago on the South Island of New Zealand on 28 August.

John Gallie was a shepherd, an occupation in much demand for New Zealand’s sheep rearing industry, where he became a sheep ranch manager. But, aged only 27, he died in 1883, probably from appendicitis. By then he and Jessie had two small daughters, Christina and a young Jessie, and their mother decided to return to her parental home. So the trunk set sail again for its return to Scotland. Back home, Jessie met Mr Harris’ great-grandfather Alexander MacArthur, whom she married in 1895. They had one child, Mary, and went on to lease the farm of Knockloam in Nairnshire. Mary MacArthur settled in Nairn and also had an only child, daughter Sheila.

The trunk then spent some years at homes in Ross-shire and Nairnshire and then, in 1958, it was sent by train to Sutton Coldfield in Warwickshire, where it was in three successive childhood homes of Sheila’s son Ian. As an adult, Ian moved to Copenhagen in Denmark and the trunk was sent to join him there in 2000.

We do not know what happened to the three other trunks that set off for New Zealand in 1879, but it is likely that they were disposed off during one of their owners’ house moves. The remaining trunk is in very good condition, with only some damage to its internal tray and some of the lining paper peeling off. Our conservators will be able to stabilise further wear and repair it before it goes on display.

The trunk has a slightly curved top, a style common in the late 1870s which allowed for deeper fragile items to be stored in the top tray. It was almost certainly purchased new for the young emigrant couple. The shape was probably dictated mostly by the fashion of the time, but some travellers may have picked this style in the hope that their trunk would be stacked at the top of a pile of luggage. The trunk has four small casters on its base so that it could be moved about with ease, and the base is reinforced with a sheet of metal.

This trunk helps to illustrate a national story of Scottish migration to New Zealand: in 1858 approximately 8,000 people living in New Zealand gave their birthplace as Scotland, but by 1901 the figure was almost 48,000. The trunk also illustrates one family’s story of emigration and return, and how people retain and reuse objects both for practical and sentimental reasons. It also tells the personal story of one individual’s connection to his past and of continuity across the generations. This is why the trunk is important in the National collections.

This cabin trunk’s travels are not over: it will be used in displays in the years and decades to come at the National Museum of Scotland in Edinburgh and may well go on loan to museums in the countries that Scottish people have settled in.