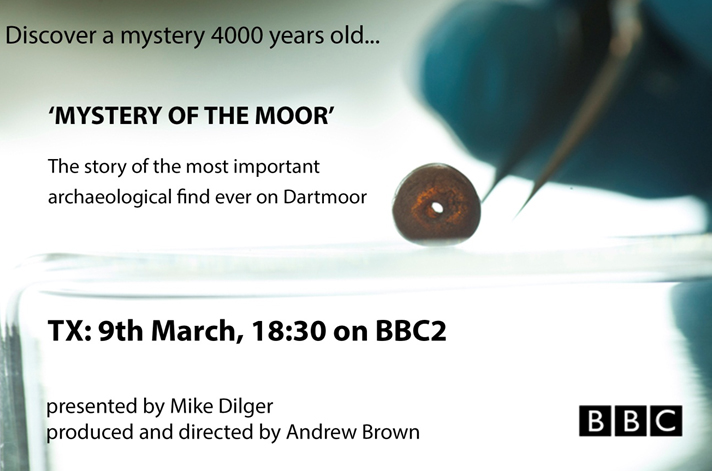 Mystery of the Moor is about a very special Early Bronze Age person whose cremated remains were buried in a cist (a stone box-like grave) in a peat mound around 3,800 years ago on Whitehorse Hill, one of the highest tors on Dartmoor, Devon. Because the cist was constructed in a pre-existing hillock of peat, its contents quickly became waterlogged and, despite the side of the cist being exposed for over 10 years, the contents were found to be miraculously preserved when the cist was excavated in 2011.

The person’s cremated remains – which were probably those of a woman, aged 15–25 – had been wrapped in a pelt and carefully laid on a mat of plant material on the base of the cist. Between the mat and the bone parcel was found the remains of an exquisite garment of fine calfskin with an inset panel of woven nettle fibre, surrounded by triangular calfskin appliqués. Further traces of textile, this time burnt, were found with the bones; this must represent a funerary garment worn as the corpse was cremated on the pyre.

The most spectacular find, discovered on top of the bone parcel at one end of it and itself covered by a mat of plant material, was a finely-woven cylindrical container of woven lime bast. Inside it, and spilling out of it, was a set of precious jewellery comprising two pairs of wooden studs – one probably for ear lobes, the other possibly worn around the mouth – plus a necklace of tin, amber, Kimmeridge shale and clay beads and an arm band of plaited animal hair with tiny tin studs.

All these items, and the fine garment and the positioning of the grave, tell us that the person in this cist had been accorded very special status in Early Bronze age society.

This discovery is of national and international importance in several respects, not least because of the preservation of materials that don’t normally survive. It is incredibly rare to find well-preserved metallic tin objects: normally tin oxidises and crumbles away. The armband is unparalleled, and reminds us that there could have been many types of Early Bronze Age object that simply haven’t survived.

I have been working on these wonderful finds, with an army of specialists from across Britain has been working on the finds, on behalf of Jane Marchand (Archaeologist, Dartmoor National Park Authority) and Andy Jones (Historic Environment Projects, Cornwall Council) and with funding from English Heritage (through Vanessa Straker); and amazing revelations keep on coming. It has been my special privilege to research the jewellery, and to this end I have recently visited Hal Redvers-Jones in Whitby (the last surviving traditional Whitby jetworker) to see how the tiny disc beads of Kimmeridge shale had been made.

The fascinating television programme, Mystery of the Moor, features some amazing experimental craft-work that was commissioned by de facto films’ Andrew Brown, the programme maker and gives us a glimpse at Early Bronze Age technology.