On 10 May 2011, North Berwick Day Centre held their “Jolly Boys” day out to National Museum of Flight. Amongst the groups company were two VIPs, Harry Tait and Ron Fathers.

Ron was a ground electrician stationed here for eight months with a detachment of Handley Page Halifax heavy bombers. The Halifaxes operated the Air Dispatch Letter Service from London to Norway, using East Fortune as a staging post. They operated daily to Stavanger or Oslo, during May and June 1945. Ron met his wife at a dance in North Berwick. Harry is a well known friend of the Museum and was a Beaufighter pilot when he was stationed here during the Second World War. 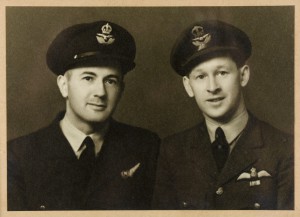 Harry was delighted to see the Beaufighter, which is in the Restoration Hangar at National Museum of Flight, and also to watch his interview in the Fortunes of War film. You can find out more about Harry’s career here.